But the Growth in China and the World in General of Millionaires and Billionaires Can Absorb Ferrari’s Increased Production!

Without question, the most common pushback to the short thesis on RACE from my first Ferrari article (How to Destroy a Great Global Brand) published two weeks ago, is that there is a growing amount of rich people in the world, so it should be just as easy to sell 15,000 units as it is to sell 6,000. The argument is along these lines “Ok, so perhaps 10-15 years ago, 5k-6k was the right number to allocate to customers for Ferrari to maintain exclusivity and to substantially under-supply the true demand. But with the global growth and wealth along with the increase in millionaires and billionaires who can afford Ferrari, the number of new Ferrari customers in light of their excellent branding should easily allow Ferrari to grow their production to 12k vehicles in the next year, and 15k by 2022. This is a fantasy, and we will walk through the reasons and logic below.

The Exclusivity is Already Gone

Ferrari exclusivity is already gone. Aside from our proprietary checks and research, one need only look at Autotrader (Pistas for Sale – Wealthy Buyers Needed) to see the number of “exclusive” Ferrari’s Pistas to see if is not quite so exclusive as many might have you believe. Last week, the number of Pistas for sale swelled to over 50 (more than 20% above the prior week) and now sits at 48 in inventory (all are either 2019 or 2020 model years) ranging from 54 miles to 2740 miles on the odometer and from $650k asking price to $419k asking price. This is no longer exclusive and fails to include many other Pistas available that are not listed on Autotrader. If the newest, latest and greatest can only be acquired through dealer allocation, how is it that anyone who is able to write a check or finance a vehicle for around $500k can have one?

It’s Not Really Backlog if Customers are Flipping So Quickly

We discussed at length the problem of having “fake backlog” in many industries, as companies and individuals will “double-order” when the market for a product is hot. We have seen this in myriad industries ranging from semiconductors to wine, and real estate to hypercars. As a Ferrari customer, you used to have to sign an agreement with your dealer that you won’t sell it within the first 12 months of owning it. (Dealers also were not supposed to transact above MSRP, but they always found a way around it.) If the customer broke this agreement and advertised within the window, he could be sued and of course, would never see another allocation from Ferrari. So, as the time window opens on recently delivered Pistas, more will come onto the market. It is simple enough. People over-order to ensure they receive an allocation. This means that there is effectively, no backlog. The order book has a lot of fluff in it. That’s not to say that Ferrari cannot go down deep onto the order book and find customers who never really thought they would receive an allocation but ordered anyway. It will be interesting to see how it unfolds. However, we would highlight to the Ferrari enthusiasts that ~50 Pistas for sale should seem odd. This is the “coveted” allocated vehicle. Why are so many being “flipped”? What happens as more hit the market? And by the way, Autotrader is not the only channel. Pistas are being re-sold through dealers, Dupont Registry, through auto consultants, specialists, etc. If the Pista is so exclusive, an individual who has never owned a Ferrari should not be able to buy a nearly new Pista and have their choice of color, etc., for basically MSRP. And that is exactly what is happening right now.

But China is So Big and There are So Many Wealthy People?

Despite that common refrain, there are many companies which have targeted China as a “customer-rich” market only to be disappointed later. Pursuing the “1.2 billion potential Chinese customers” for western businesses has become such a cliché that it is even mocked in modern-day animated satire, South Park (South Park Mocking China and Sucking up to China)

Current sales in China – (China Car Sales) are in free-fall and de minimis across manufacturers and categories. While the Coronavirus is clearly a huge factor influencing the 92% DECLINE IN CHINA AUTO SALES in February, why has Ferrari barely been punished while other companies and their respective stocks have been destroyed?

Below is a Year-to-Date 2020 chart. Ferrari is the blue line standing out due to its outperformance down only 6% this year. Relative to luxury goods maker PVH and CPRI – down 32% and 36% respectively, and supercar European manufacturer Aston Martin, down 47% so far year-to-date.

Ferrari shareholders continue to remain in denial about the company’s fate, and continue to believe that Ferrari is a “defensive stock.” While it is good to see RACE stock decline a quick ~12% from its all-time high from two weeks ago, it has remained resilient despite missing numbers and the headwinds facing China and the global economy.

(See the two-year Bloomberg Chart below. RACE is even with the S&P during 2018, and then outperforms throughout 2019 and into 2020, and still is holding in against the broad market index.) 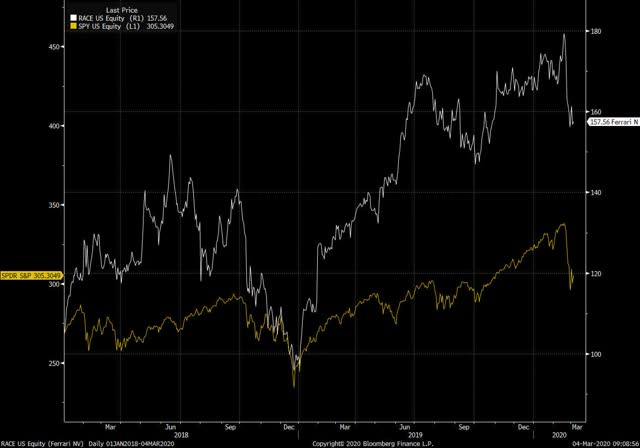 And RACE is providing shareholders and short-sellers a great opportunity as the numbers are going to have to be cut from here, and the multiple for a capital-intensive and secularly declining business is still absurdly high. Recall, Volkswagen (owns Porsche, Lamborghini & Bugatti) trades at 5.3x 2020 EPS and<5x EBIT. Even when Porsche was a standalone company, it traded between 10-13x EPS. Thus, the Ferrari multiple seems extreme in light of lower numbers and the headwinds they are facing. And the decline in China sales is only the start. We will explore this in greater detail, but for most of the Ferrari cult that will simply repeat over and over that wealth in China, and other markets can absorb anything that Ferrari might produce. Unfortunately, it appears they have spent little time in China. Those who spend time in China quickly come to understand that the wealthy in China prefer to be DRIVEN, NOT to drive. This bodes well for companies such as Rolls Royce, which has a terrific luxury brand identity, but not so much for brands such as Ferrari and Lamborghini. The frequent retort is that this applies to the older crowd in China, and that the young and wealthy Chinese love to drive Ferraris. The data would suggest otherwise. And the young uber-wealthy Chinese supercar buyers tend to live in places such as LA, and are already savvy Ferrari customers.

Following the publication of the first analysis of Ferrari on Seeking Alpha, I posted it on LinkedIn as well for increased visibility and received a few private messages via Seeking Alpha and many more from LinkedIn contacts. The most surprising reaction for me is the number of Ferrari experts (dealers or sales professionals) who I do NOT know, who read the article and acknowledged that they agreed with the article almost in its entirety. While those I have known for many years, and consider to be good acquaintances might have a comfort level being candid, it was surprising that complete strangers whose livelihoods depend on the ongoing strength of Ferrari new and resale vehicles were also willing to be so candid.

The Examples of Bentley and Bugatti

Ferrari is a great brand and has a history of making great F-1 race cars and creating demand among wealthy individual enthusiasts who have wanted the prestige and exclusivity of driving a street-legal race car. However, when you look beneath the horses, Ferrari is just another high-end auto manufacturer no matter how those in the cult may try to spin it otherwise. To that end, here is some food for thought:

Bentley: When looking back at Bentley sales (see table below) you can notice a few things:

It is true that Ferrari has undersupplied the market for many years, but this is no longer the case, as evidenced by what is happening with residual values of barely used new Ferraris in the resale market. There is a good argument to be made that the current level of demand for Ferrari is not sustainable as the buyers who over the last few years have bought cars realize that the depreciation curve has steepened significantly. They bought it assuming the historical dynamic of undersupply would support residual values, and now realize they were wrong given the ramp in supply. There is certainly plenty of data from the forums of people complaining about depreciation and how it makes their next purchase more difficult as they trade in their existing car.

Back to the data above, Bentley is very close to Ferrari when it comes to the price point (slightly below) while Bugatti is at the very high end of Ferraris range if not above it. Both ends of the spectrum are cyclical, both show no real growth from peak to peak. Paying 50x cash EPS for a company that is cyclical and will have little to no growth peak to peak does not seem prudent – particularly when the transition to EV will bring down barriers to entry further and the transition to self-driving cars may make Ferrari obsolete altogether.

Ferrari numbers have already been lowered after the last quarterly report in early February, only to have starry-eyed ebullient analysts push investors to buy RACE to a new all-time high near $181 per share. China sales are clearly not materializing so far this year, and USA sales appear very slow with aftermarket sales characterized by an abundance of “nearly new” vehicles with declining residuals. Undoubtedly, there are some wealthy individuals who are not very price-sensitive, and losing a few hundred thousand dollars on a vehicle is similar to most people losing a percentage of their new mass-produced vehicle when they drive it off the lot. But for most people, they don’t like losing money that quickly, and if Ferraris were truly so sought-after and exclusive, why are there so many for sale? Why are we seeing price declines? When the price of RACE declines 75% from current levels, it will still be expensive, and garner a big premium over competitors, but it will be less egregious than it is today. We encourage RACE shareholders to sell aggressively and would encourage those who are looking for shorts to put RACE at the top of their lists. The stock is like a snowball at the top of Mont Blanc (Monte Bianco) about to pick up steam and turn into an avalanche of selling.

Disclosure: I am/we are short RACE. I wrote this article myself, and it expresses my own opinions. I am not receiving compensation for it (other than from Seeking Alpha). I have no business relationship with any company whose stock is mentioned in this article.

Editor’s Note: This article discusses one or more securities that do not trade on a major U.S. exchange. Please be aware of the risks associated with these stocks.