At the end of January, I wrote a piece titled “This Is Nuts: Why We Reduced Risk” discussing why we took profits in our portfolios. Here is the important point:

“When you sit down with your portfolio management team, and the first comment made is ‘this is nuts,’ it’s probably time to think about your overall portfolio risk.”

At that time, we began the orderly process of reducing exposure in our portfolios:

In the Equity Portfolios, we reduced our weightings in some of our more extended holdings such as Apple (AAPL) Microsoft (MSFT), United Healthcare (UNH), Johnson & Johnson (JNJ), and Micron (MU).

The important sentence came next:

“We did not ‘sell everything’ and go to cash. We simply reduced our holdings to raise cash, and capture some of the gains we made in 2019. When the market corrects, we will use our cash holdings to either add back to our current positions or add new ones.“

At the time we made those changes, it appeared we were clearly wrong, as the market continued to grind higher. As Howard Marks once quipped:

“Being early, even if you are right, is the same as being wrong.”

From a portfolio management, and more particularly, a “risk mitigation” view, our job isn’t necessarily to hit the exact tops or bottoms, just to provide a cushion against losses. This is why we constantly measure risk and make adjustments accordingly.

Over the last couple of weeks, we have continued to repeatedly note the extreme overbought, overly bullish, and over-complacent conditions of the market. This was a point we discussed with our RIAPRO subscribers in last Monday’s technical market update.

“As noted last week: ‘With the market now trading 12% above its 200-dma, and well into 3-standard deviations of the mean, a correction is coming.’ But the belief is currently ‘more stimulus’ will offset the ‘virus.’

This is probably a wrong guess.

Extensions to this degree rarely last long without a correction. Maintain exposures, but tighten up stop-losses.”

That extreme deviation from the long-term mean was unsustainable. What was needed was a catalyst to cause the slide. This past weekend, the realization the “coronavirus was NOT contained” was the trigger needed to revert that overly stretched condition.

This is the misunderstanding of portfolio management. Risk management decisions are not being “all in” or “all out.” Making extreme movements actually increases your portfolio risk due to the high probability of making a “wrong call.”

For us, risk management is like driving a car. When you drive, you are constantly making a myriad of small adjustments from adjusting your lane position, your speed, and your positioning relative to the other cars. You are also simultaneously assessing the “risks” of other drivers, the weather, unexpected obstacles, and traffic signals and signs. After years of driving, you subconsciously make all these decisions without giving it much thought, but in actuality, you did.

The same goes for portfolio management. Small adjustments made to keep the portfolio moving forward while avoiding the potential of a catastrophic accident is the goal. Sure, it is entirely possible we could get into a “fender bender,” and such should be expected. What we want to make sure of, however, is that in the event of a crash, we will walk away relatively unharmed. This is why we make sure our portfolio has a seat belt (cash), airbags (hedges), strong structural support (bonds), and we drive a little slower than the speed limit (allocation).

With the markets pushing into 3 standard deviations above the 200-day moving average, it was only a function of time before a correction occurred. Therefore, while we were early taking profits, the end result was reduced portfolio risk against a pending correction.

“Taking profits, and reducing risks now, may lead to a short-term underperformance in portfolios, but you will likely appreciate the reduced volatility if, and when, the current optimism fades.”

On Monday, that reduced volatility was greatly appreciated.

While our assessment of the market two weeks ago was that risk versus reward was unbalanced, as we noted then, such can remain the case for extended periods of time.

“The problem with an economy being propped up by artificially appreciated assets is that this pendulum swings both ways. At some point, prices eventually decline. No one knows what will cause the decline:

As we have repeatedly stated, it was thew impact of the “coronavirus” which the market has failed to account for. To wit:

Given that U.S. exporters have already been under pressure from the impact of the “trade war,” the current outbreak could lead to further deterioration of exports to China. This is not inconsequential as exports make up about 40% of corporate profits in the U.S. With economic growth already struggling to maintain 2% growth currently, the virus could shave another 1% off that number.

Importantly, this decline happened BEFORE the “Wuhan virus” which suggests the virus will only worsen the potential impact.

The impact of the virus has not been factored in by the market.

Remember, it never just starts raining; clouds gather, skies darken, wind speeds pick up, and barometric pressures decline. When you have a consensus of the evidence, you typically carry an umbrella.

With the “selloff” on Monday, the immediate reaction by investors is to jump in and “buy the dip?”

The chart below is part of the analysis we use to “onboard” new client portfolios. The purpose of this measure is to avoid transitioning a new client into our portfolio models near a short-term peak of the market. The vertical red lines suggest we avoid adding equity risk to portfolios, and vice versa.

With both “sell signals” being triggered short term, and the market breaking the 50-DMA, this is not an opportune point to dramatically increase equity exposure. In other words, be careful “buying the dip” if you are so inclined. 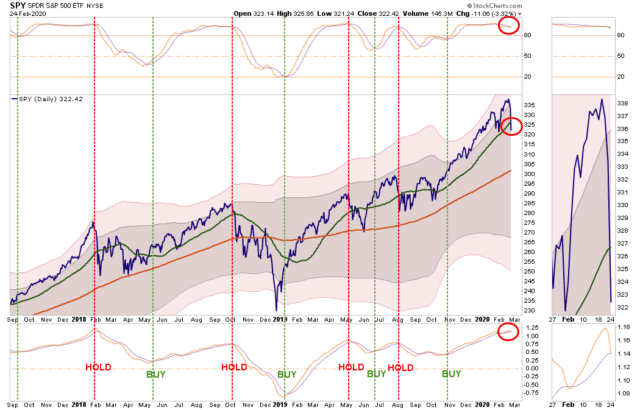 There are a few important points to denote in the chart above.

However, with that said, on a very short-term basis the market is now oversold enough to elicit a short-term, reflexive rally. This type of bounce is often termed a “dead cat” bounce, and basically suggests a one- or two-day rise that quickly fails to retest the previous low.

I have also noted that we are in the process of forming a potential “head and shoulder” topping pattern with a very clear “neckline” at yesterday’s closing price. A rally back to resistance at the previous “left shoulder,” and a break of the subsequent “neckline,” would entail a decline to the 200-DMA, or about 10% from the recent peak. 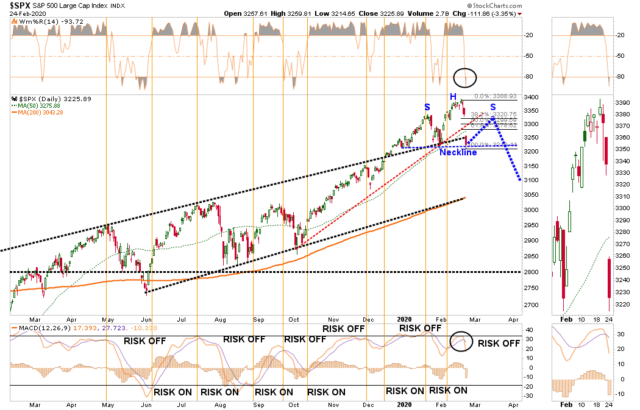 Given the MACD has registered a “sell signal” from a fairly high level, investors must consider the risk of further downside even if the market rallies over the next couple of days.

Don’t be fooled that a short-term reflexive rally is an “all clear” for the bull market to resume. With the bulk of our momentum, relative strength, and overbought/sold indicators just starting to correct from recent highs, it is likely short-term rallies will be “selling opportunities” over the next couple of weeks as the market either corrects further or consolidates recent gains. 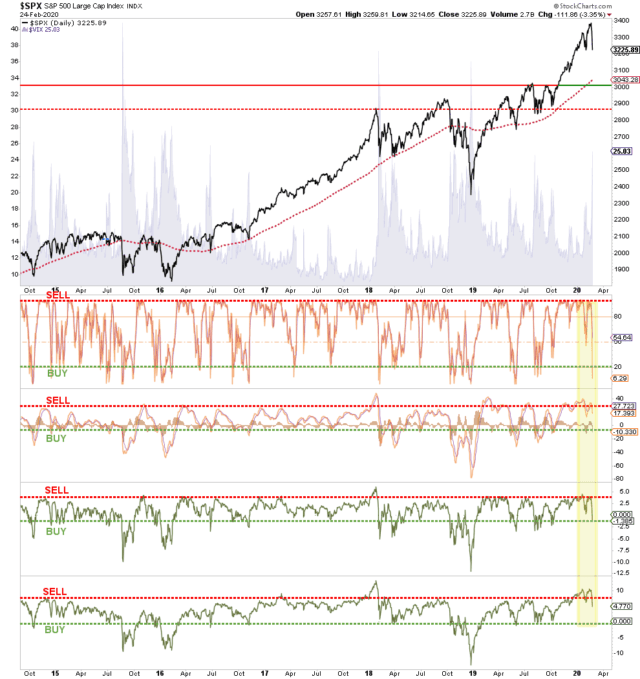 As we have detailed over the last few missives, due to the rather extreme extension of the market, a correction would likely encompass a 5-10% decline in totality before it is complete. As of today’s close, the market is down 4.74% from its recent highs.

As noted in this past weekend’s missive, the Federal Reserve has begun reducing its torrid pace of liquidity, while already weak economic growth, and potentially weaker earnings growth, is at risk from the impact of the coronavirus. 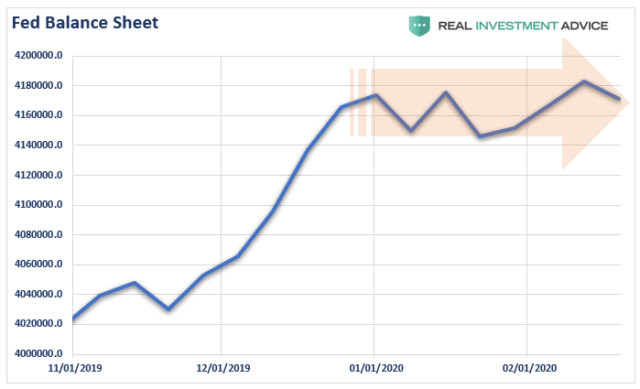 From that perspective, we are continuing to maintain our higher levels of cash, and are opportunistically rebalancing portfolio risks as needed according to our investment discipline.

Notice, nothing in there says, “sell everything and go to cash.“

By having reduced risk, we can afford to remain patient and wait for the next opportunity.

Like our car driving analogy above, it is always the ones who are sending a text, holding a breakfast burrito with the other, and driving with one knee who always winds up in the worst possible condition.

We prefer to keep two hands on the wheel at all times.