Nvidia (NVDA) posted blockbuster fourth quarter results after market close on February 13. Its revenues for the period came in at $3.11 billion, beating the Street’s estimates by almost 5%. But besides the revenue outperformance, there were a number of details – such as healthy data center and gaming sales numbers and an upbeat revenue guidance for Q1 – that were equally impressive. As a result, it seems likely that the GPU manufacturer’s share price would continue to rally further over the course of 2020. Let’s take a look.

Let me start by saying that Nvidia’s revenue beat wasn’t unexpected. The company has exceeded the Street’s revenue estimates in 17 of its last 19 quarters post this earnings release. At this point, its management seems to have developed a knack for outperforming the market expectations which is generally considered to be the sign of quality management.

Having said that, the highlight of Nvidia’s Q4 earnings report was its data center sales performance. The chipmaker posted record data center revenues in Q4, registering a revenue growth of 43% year over year and 33% sequentially. The company also recognized its largest-ever sequential growth in dollar terms from the end-market, during its said quarter. 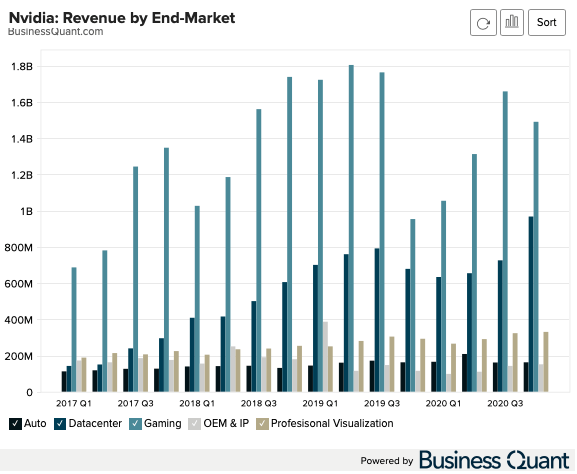 Its management noted during their Q4 earnings call that their T4 and V100 shipments surged to record levels which drove its datacenter revenues to new highs. Shipments of the said chips had already reached record highs during Q3, but the fact that Nvidia was able to top that right in the next quarter, is quite a remarkable feat – operationally and financially – in my opinion

But all this wasn’t unexpected. Yours truly had actually opined in a previous article that Nvidia’s data center revenue growth could accelerate and its shipments were to surge further during Q4. From the previous article:

I personally believe that Nvidia is en-route to registering another quarter of record T4 and/or V100 shipments during Q4…it’s possible that the GPU manufacturer registers accelerated sequential data center revenue growth during Q4.

Nvidia’s data center revenues exhibit little to no signs of yearly cyclicality; this is actually evident from the chart above. This happens because once its enterprise customers approve the technical testing kits and start purchasing actual SKUs, their bulk buying can last for several quarters straight, right until they’re ready for an upgrade or an architectural shift.

As far as forecasts go, I don’t see this dynamic changing materially over the course of 2020. The competitive landscape isn’t expected to change by much in the data center space at least. Moreover, the adoption of cloud GPU-based services, whether that’s cloud gaming or machine learning in the cloud, is only growing with every quarter. So, I believe Nvidia will be a prime beneficiary here and its data center revenues can further grow over the course of 2020.

Fact of the matter is that Nvidia’s gaming business is cyclical in nature. Its OEM customers purchase most of their GPUs during Q3, ahead of the holiday season, and these B2B purchases taper over the course of Q4 and Q1 as these OEMs try and clear their inventories. So, the drop in Nvidia’s gaming revenues by a modest amount is no surprise.

But there’s a silver lining here.

Nvidia’s gaming revenues sequentially declined by an alarming rate (~46%) in the comparable Q4 from last year. So, technically, the company did a good job by registering only a modest 10% drop this time around.

Also, I’d like to point to readers that Nvidia was facing a slump in crypto demand and saturated inventory channel last year. So, its reduced rate of decline goes to highlight how far Nvidia as a company has come since then, and that its management has been successful in fortifying gaming revenues.

Besides, one may argue that Nvidia’s gaming revenues saw a sequential increase during Q4 FY2017 and Q4 FY2018 periods. But we must also remember that this growth was fuelled by Nvidia’s then newly released 14 nm-based Pascal GPUs and breakneck crypto demand.

The chipmaker reportedly has its next major release scheduled for this year – the Ampere line-up built on TSMC’s (NYSE:TSM) next-gen 7nm node. So, I’m of the opinion that Nvidia’s Q4 of FY21 will be stronger than its preceding Q4 FY20 and Q4 FY19 results from the standpoint of sequential revenue growth.

Nvidia’s management is expecting their Q1 revenues to come in at $3 billion, plus or minus 2%. They said during the earnings call that the guidance has been lowered by $100 million to accommodate for disruptions caused by the Coronavirus. This turns out to be a reduction of about 3.2% from the supposedly original guidance of $3.1 billion.

Only time will tell what the actual number comes out to be. Nvidia may not be facing any supply disruptions from TSMC but the availability of assembly line staff in China could potentially be affected. Nvidia’s management addressed the Coronavirus risk during their Q4 earnings call, by saying:

… it’s really still quite early in terms of trying to figure out what the impact from the overall coronavirus maybe. So, we’re not necessarily precise in terms of our estimate… We have about 30% of our overall China gaming as a percentage of our overall gaming business. For data center, it moves quite a bit… we’re probably looking at Q1 to be in the low double-digit sequential decline in gaming…

Having said that, the silver lining here is that, in spite of the Coronavirus risk factor, Nvidia’s Q1 revenue guidance involves a 35% growth on a year-over-year basis. This goes to highlight its robust performance in its core markets.

Nvidia is reportedly going to launch its 7nm SKUs this year. Unless its engineering and marketing teams botch up on execution, which rarely happens, the chipmaker may actually be en-route to posting stellar revenue growth over the course of FY21. Nvidia’s healthy Q4 results and its management’s upbeat Q1 guidance suggests that this is a plausible scenario.

So, I’m of the opinion that Nvidia’s shares can rally further over the coming weeks and months, and any weakness in its shares may be construed as a buying opportunity. Good Luck!

Author’s Note: I’ll be writing another report on Nvidia next week. You can stay updated by clicking the “Follow” button at the top. Thanks!