The coronavirus, or COVID-19, is spreading around the world, not just physically, but also mentally. The stock market has caught a flu too, with the market in correction status right now. Some stocks can take advantage of the coronavirus. Zoom (ZM), for example, is an obvious company that benefits from the virus. Other companies are hit extra hard. Match Group (MTCH) is in that last category. This is how its price has done over the last month:

Now is the time to take advantage of this fall and accumulate shares in Match. In this article, I will give you 7 reasons why.

An introduction to the company

Most of you will know Tinder, the most important product of Match. You can see how important it is for the company in this graph: 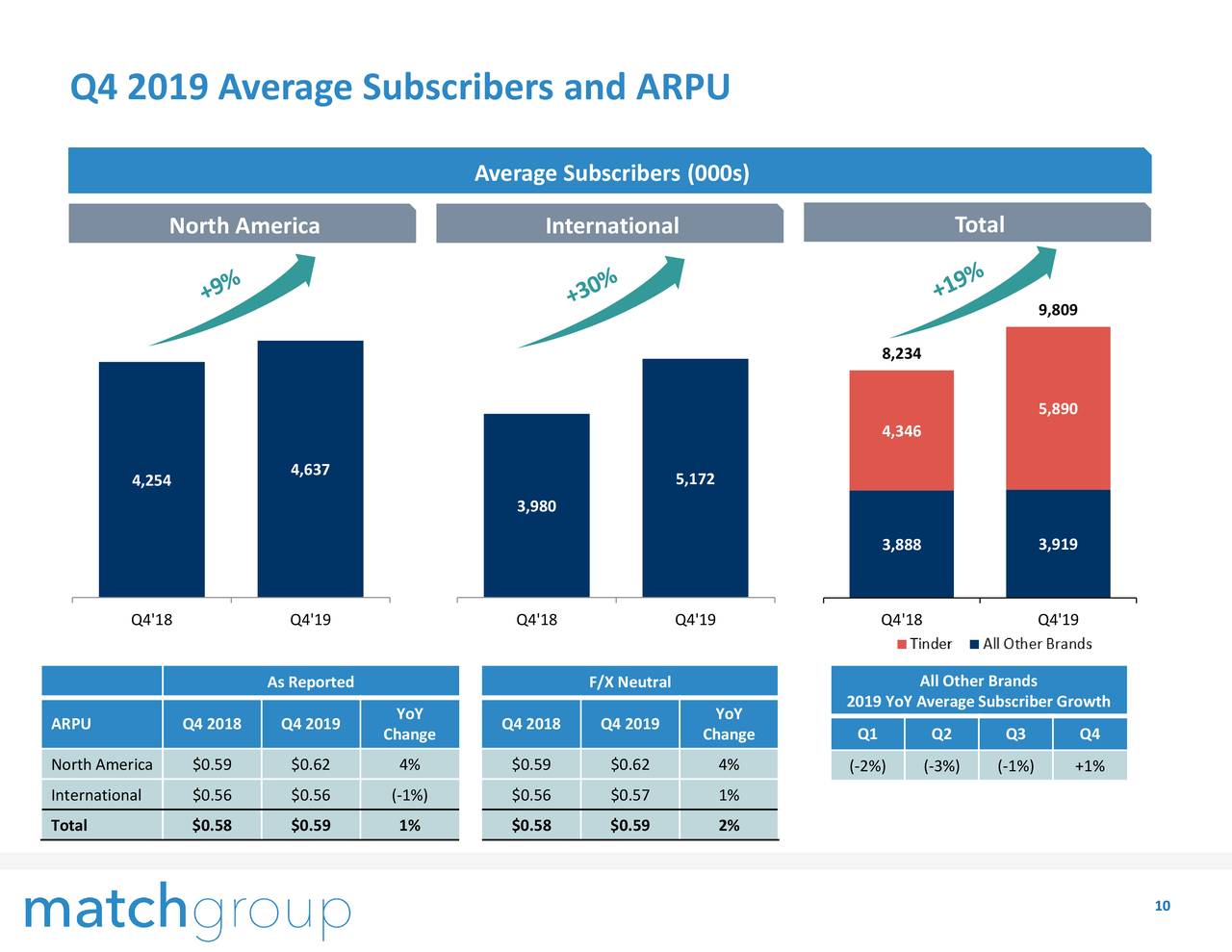 All other Match brands are more or less stable, not growing and not going down too much. But Tinder lifts the total number of paying subscribers, producing 19% YoY growth. Of the total revenue in 2019 of $2B, Tinder brought in $1.15 billion. Despite its size, Tinder’s revenue still grew by an impressive 43% from 2018 to 2019. 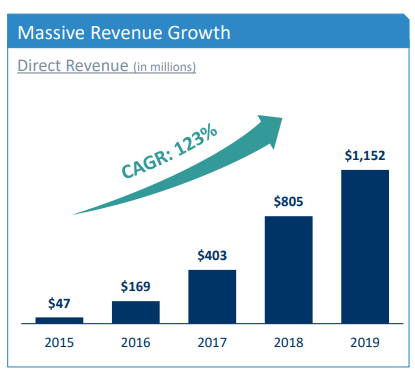 The number of paying subscribers keeps rising too: 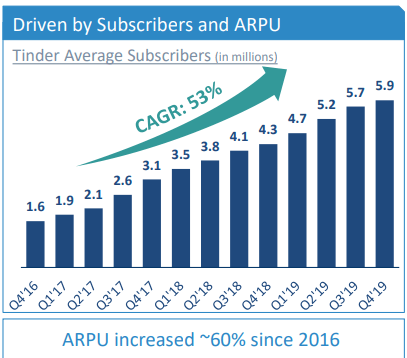 Tinder has already been downloaded more than 350 million times, crushing all competition: 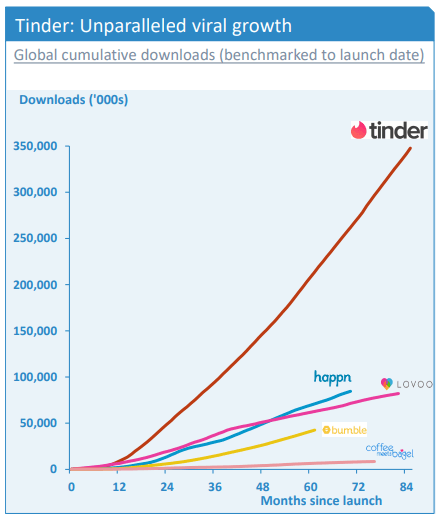 But Match Group does much more than just Tinder. It has built out a real empire of online dating services:

While the adoption of Tinder and other online dating apps has become more and more widespread in the US and Western Europe, there is still a lot of market share to take in the rest of the world.

Tinder and the other apps Match owns don’t fully cover the biggest markets yet, with 75% of the worldwide singles: Latin America, Africa, Asia-Pacific and the Middle East. Two out of every three singles in those regions have never tried any online or app dating service, which is comparable to the USA and Europe around 2012 when Tinder launched. Countries like India or Japan, with their huge populations, have not even started using Match products. Young people there are, as anywhere else in the world, very mobile-savvy so there are not that many technical hindrances.

There is still a certain social stigma around online dating sometimes, but that was the case in Europe and the USA too just a decade ago, which shows how quickly that can change. 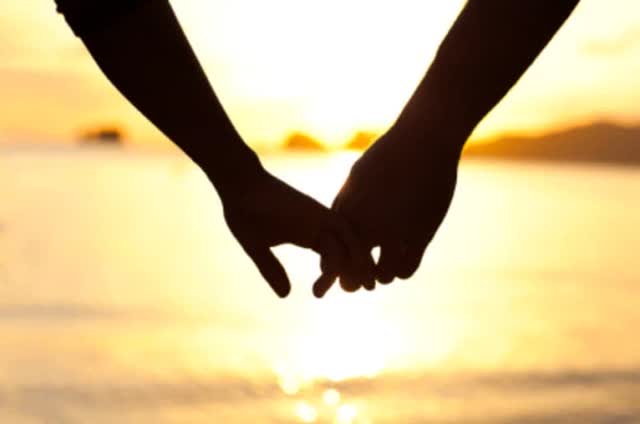 Match Group has a market cap of $18.5B now and I can see that expand several times over the next few years and decades. The company has a P/E of 35 and a forward P/E of 25.8, according to finviz.com. That’s low for a company growing at Match’s speed.

Match is expected to grow its earnings annually by 25.5% over the next five years. If you calculate a ‘future PEG’ by dividing the forward P/E by the growth expectations of the next five years, that would give Match a ‘forward PEG’ of just 1, which is really cheap for a quality company riding a long-term trend like Match.

As you may or may not know, probably in Q2, Match will be spun off from its mother company InterActiveCorp (NASDAQ:IAC), which owns 81% of the shares and 97.6% of the voting power.

For investors, one of the most important consequences of the decision to split off is that Match shares will have a much larger float than now. That means that the company can be included in the S&P 500, which will certainly boost its price, with all the index investing that has become so popular over the last few years. Big institutions will also be able to buy shares then, providing another boost.

I think Match on its own can do an even better job monetizing its very valuable assets. Match is clearly the market leader: 60% of all relations that started online or on an app began on a Match Group product. The company offers products in 40 languages worldwide and the products have 9.8 million paying subscribers.

Because Match was a subsidiary of IAC, I had the feeling Match had to restrain on growth and focus on profitability. As a shareholder, I wouldn’t mind if the company invested a bit more to conquer new areas on the map. When the company sees an opportunity, it can make swift investments, without IAC watching closely.

Another strategy for growth is, of course, the use of acquisitions. According to Bloomberg, Match considers buying the Meet Group (MEET), although my fellow contributor The Friendly Bear wrote a convincing article that the rumor may be false. My point is, though, that Match can tuck in several acquisitions, streamline them into the Match ecosystem and monetize them more efficiently. After all, the company has shown that it can do that with Hinge, which was acquired in February 2019.

If you look at the online dating market right now, you can see why monetization has not reached its limit at all. Here is a graph: 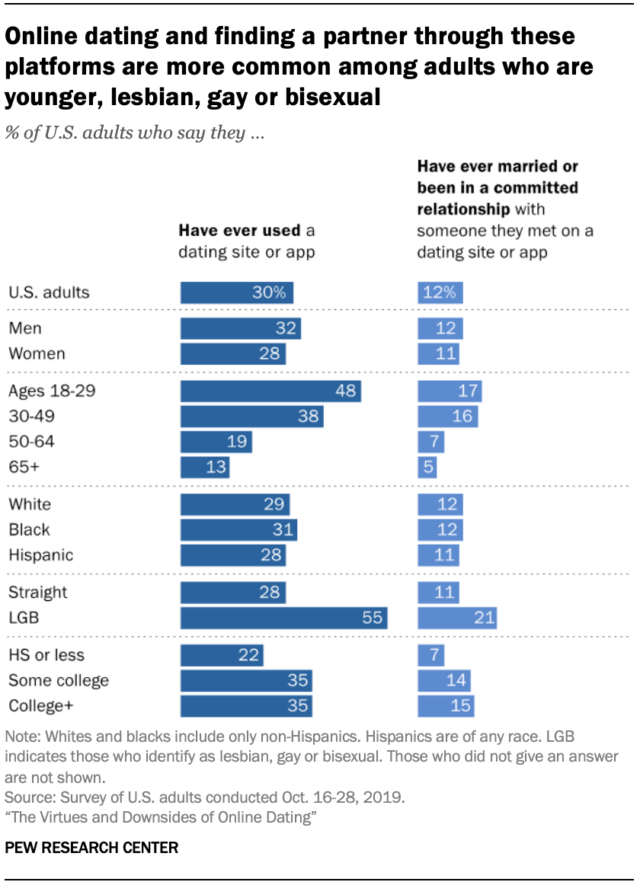 As you can see, 48% of young people, between 18 and 29, have used an app to meet other people for a relationship. That’s logical for two reasons: that is the group that looks more for relationships and that is also the group that relies more on its mobile phone for about anything.

But this is also the group with the least money of all adults. Over the long term, though, as this group ages, the customers will be willing to pay more if their life path makes them single again. So, I think that monetization is only starting. Don’t forget, for example, that Tinder only started monetizing in 2015. In just five years, revenue grew to $1.15B and I think it has lots of room to continue to grow.

Long-term trends are the most powerful weapons any investor can have in the battle to seek alpha, especially if you have the leading player on the field, as Match is for online dating. Match is by far the biggest. These numbers are a bit outdated (2017) but the four Match products are still in the top 5 now:

In the USA, online dating has already become the number #1 way to meet your partner: 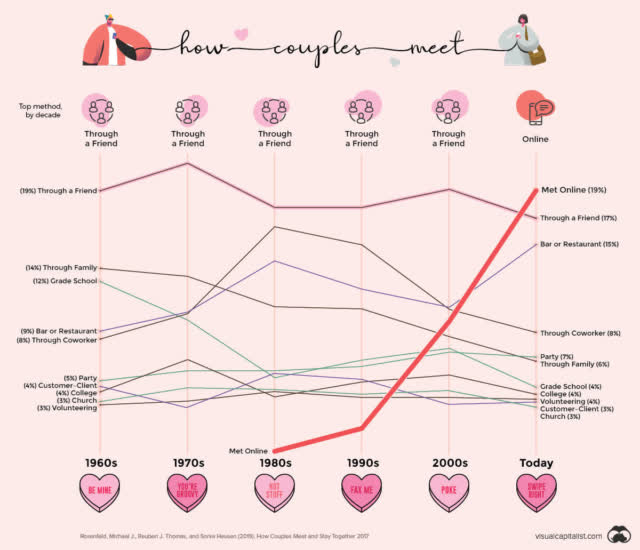 I don’t see this trend going away any time soon, but to the contrary. Of course, there is an inherent churn for Match’s products. If you have a match, you will delete the app. But overall, users are expected to grow by 5%+ over the next few years.

There are a lot of possibilities left for Match when it comes to technology. Millennials love experiences and Match could really cash in on that. What about a Tinder cruise, for example? Or Tinder festivals? I think a whole bunch of offline possibilities exist for Match to boost the experience and make the whole experience safer at the same time.

But of course, the biggest change will come online. AI is already used now but that will only get better and more precise.

The Internet of Things (IoT) also creates exciting possibilities. What if you can be matched with someone not by filling out a long and sometimes boring questionnaire or by just judging a book by its cover but by behavioral matches? What you do, not what you say, will become more important for matches and I think that behavior says at least as much about you than your image of yourself.

There are many other possibilities: first dates in virtual reality, for example. This would save you the trouble of meeting someone offline, only to be disappointed because the picture was clearly photoshopped. And it would be much safer.

Or how about genetic matching? There are several elements that play a role in the choice of our partner and one is genetic compatibility. Pheromones also play an important role that we don’t fully understand yet. So, I think there are plenty of opportunities left for Match.

Match Group is one of the stocks that has plunged because of COVID-19. While the general market is in correction territory now, Match has fallen 25%. This is an overreaction because there are still lots of opportunities for Match. Its international growth has only started and outside of the US, only Europe is a somewhat more developed market. 75% of the singles of the world live outside of Europe or the US, though. The company is also the leader in a long-term trend and its monetization is still young.

The spin-off of Match from IAC will probably give the stock price a boost because the company will be included in the S&P 500 and big funds will also be able to buy a position. And with this valuation, I’m pretty sure they will.

If you have enjoyed this article and would like to read more articles from me, feel free to hit the “Follow” button next to my name.

In the meantime, keep growing!

As investors, we all dream of multibaggers, stocks that go up 10 times or 100 times in value over the years and that is exactly what Potential Multibaggers focuses on.

Potential Multibaggers is not for those who trade in and out of stocks a lot. It’s for long-term investors who want to fill their portfolio with life-changing returns. The results are there, with an average of more than 30% alpha per pick versus the S&P 500.

At Potential Multibaggers, you get exclusive updates, several live portfolios, a watchlist and much more. Feel free to start the free trial now!

Disclosure: I am/we are long MTCH. I wrote this article myself, and it expresses my own opinions. I am not receiving compensation for it (other than from Seeking Alpha). I have no business relationship with any company whose stock is mentioned in this article.