The anti-risk Japanese Yen may gap up as the sentiment-linked Australian Dollar sinks at market open. After Wall Street closed for trading on Friday in the worst week since 2008, China released February’s official PMI data. These revealed the severity of the economic impact of the coronavirus. Non-manufacturing and manufacturing readings clocked in at 29.6 and 35.7, missing the 50.5 and 45.0 outcomes respectfully – see chart below.

This is a shock to financial markets coming from the world’s second-largest economy, both the end results and magnitude at which they missed expectations. Investors would thus have to adjust their horizons to account for the worse-than-expected data, perhaps triggering “risk-off” trade. At the end of this week, China will release trade data for January and February and those may also deliver consequential outcomes. 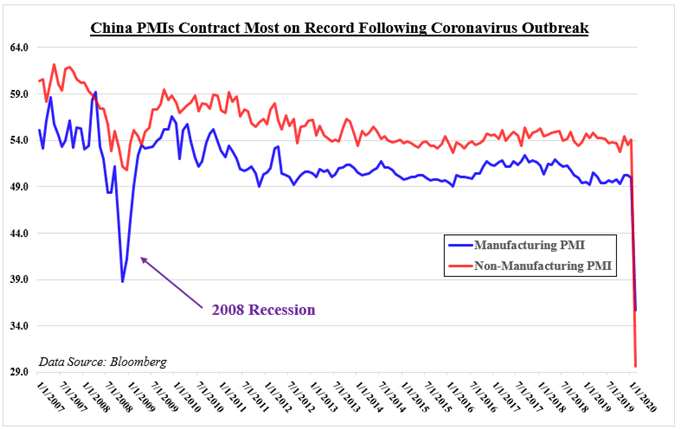 Coronavirus Cases Continued Rising Outside of China Over the Weekend

This is as new coronavirus cases were reported in parts of the United States such as California and Oregon over the weekend. The first fatality in the country from the Wuhan virus occurred in Washington state. On Friday, South Korea reported an additional 594 infected which was a 25% jump from prior. In Italy, total confirmed reports surpassed 1,000.

On Friday, the haven-linked US Dollar once again experienced a mixed trading session. Prospects of aggressive easing from the Federal Reserve worked against the Greenback with its relatively high yield at risk. In a rare statement, Chair Jerome Powell alluded to an imminent rate cut on the horizon. He mentioned that the central bank is closely watching the situation and will use its tools and act as appropriate to support the economy.

Anti-fiat gold prices weakened 3.59% in the worst day since June 2013 despite falling bond yields. During times of aggressive risk aversion, liquidity is of utmost importance for investors looking to preserve capital. In such circumstances, the yellow metal can be at a disadvantage compared to its fiat competitors. Sentiment-linked crude oil prices tumbled as the S&P 500 and Dow Jones fell -11.49% and -12.36% respectively.

USD/JPY ended last week with prices closing under rising support from August. Beyond that, the pair was unable to hold a breach under the key support barrier between 107.65 to 108.01. If there is a downside gap due, keep a close eye on this front. Taking it out exposes lows from October which would further shift the technical bias to the downside. Clearing the latter would pave the way for a test of troughs from August. 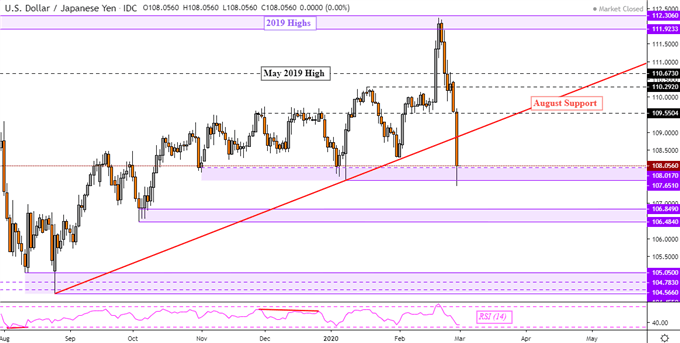