We argued early January that EverQuote (EVER) was really killing it and we got quite a bit of blowback from that article. There were commentators who argued that EverQuote was nothing but a “low-value-add lead generation business and insurers are beginning to balk at the quality of its leads.”

Well, the company indeed has a lot of skeptics (the short count is 37% of the float), but after it published the Q4 results, there are no signs of insurers balking at anything given the astounding rate of growth in its business (+85.4%) in Q4. Despite the market selloff, the shares are actually up since we wrote even after the stunning performance they put in last year:

Our investment thesis is simply that we don’t see much on the horizon that would slow the company’s growth enough to warrant a major downturn in its stock price.

While a serious turn for the worse in the coronavirus impact on the US economy could very well be such a factor, we belief the company’s guidance is significantly conservative, and with the shares still surprisingly reasonably priced, we think any corona-induced selloff offers a good opportunity.

EverQuote has a large opportunity in front of it (from the earnings deck): 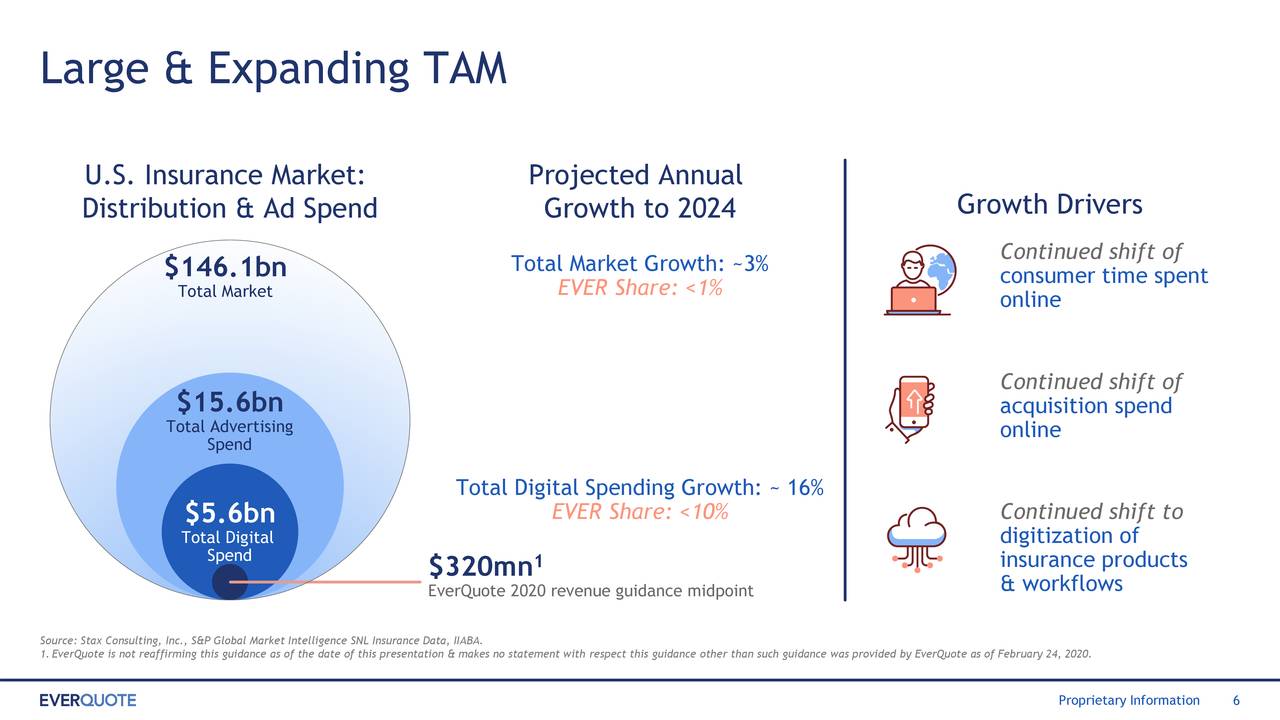 To assess its growth opportunities, it might be worthwhile to look at what the company does exactly, again (from the earnings deck): 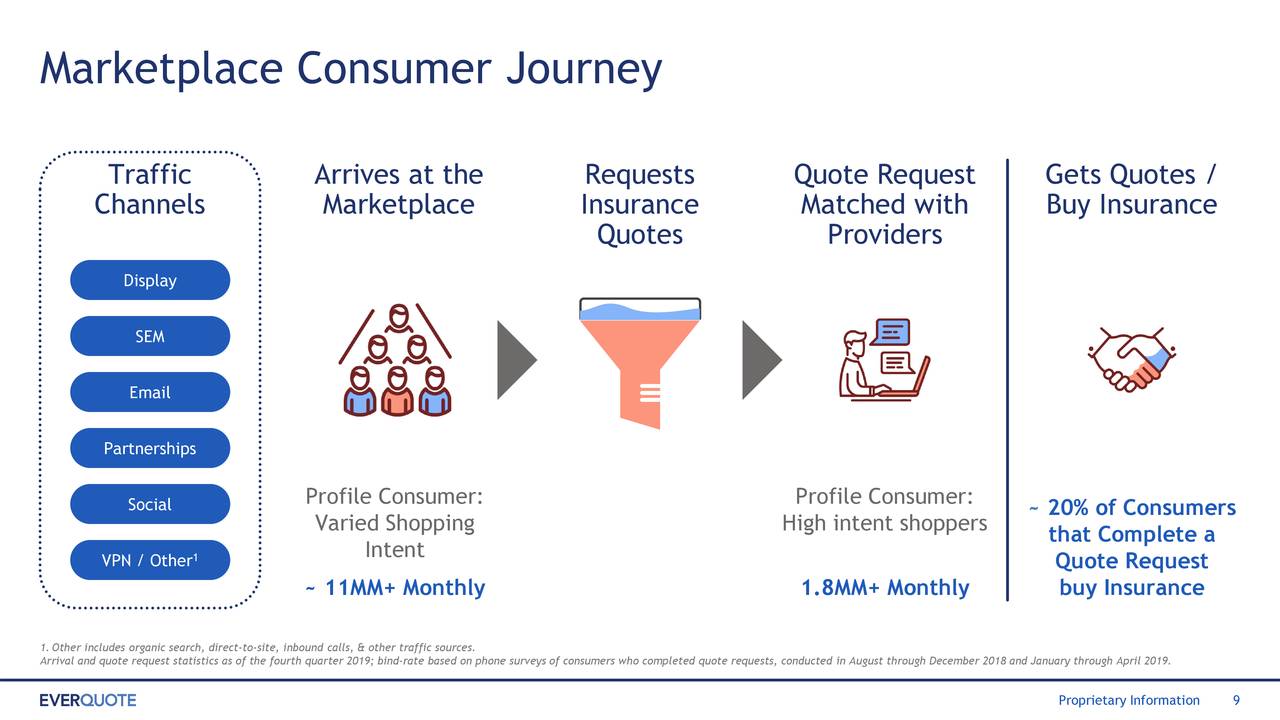 One of their main focuses this year is to make this process as smooth as possible through deep integration with all the insurance companies that use EverQuote.

Smoothing this process will create a better consumer experience, and hence help convert more customers, which benefits both the insurers as well as EverQuote. It’s estimated that consumers save $610 on average (from the earnings deck): 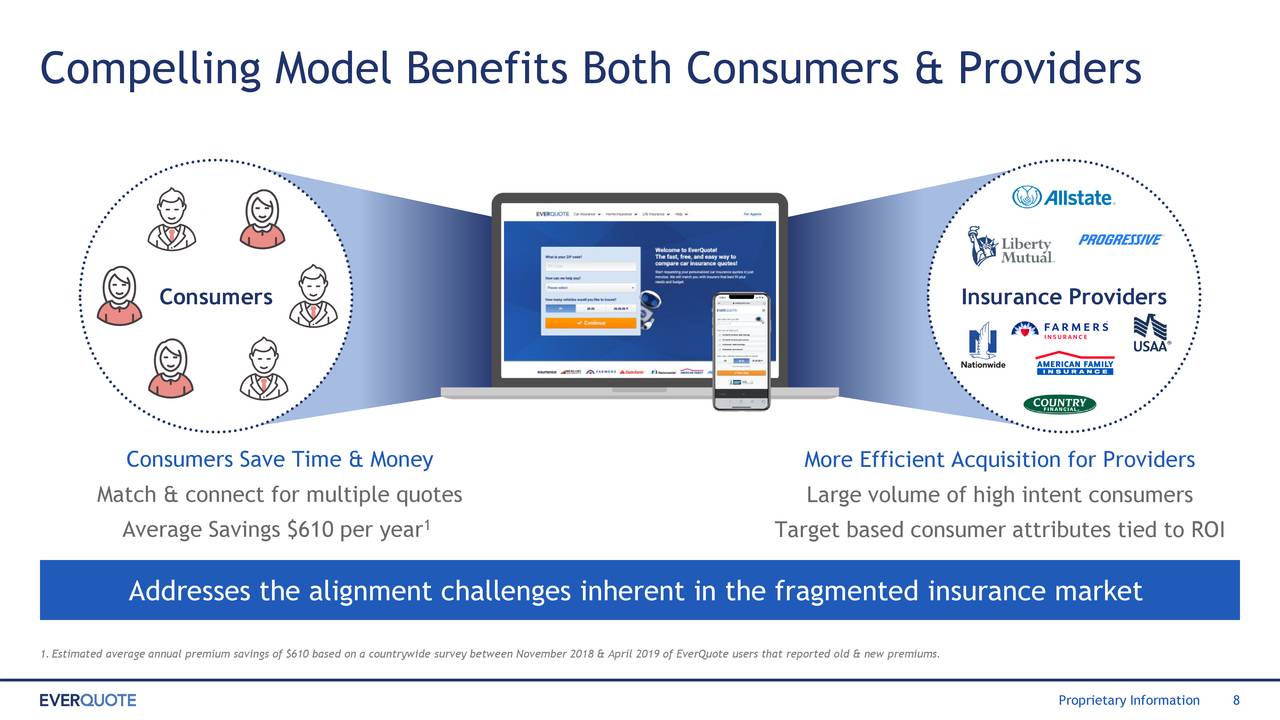 The company has multiple growth drivers (from the earnings deck): 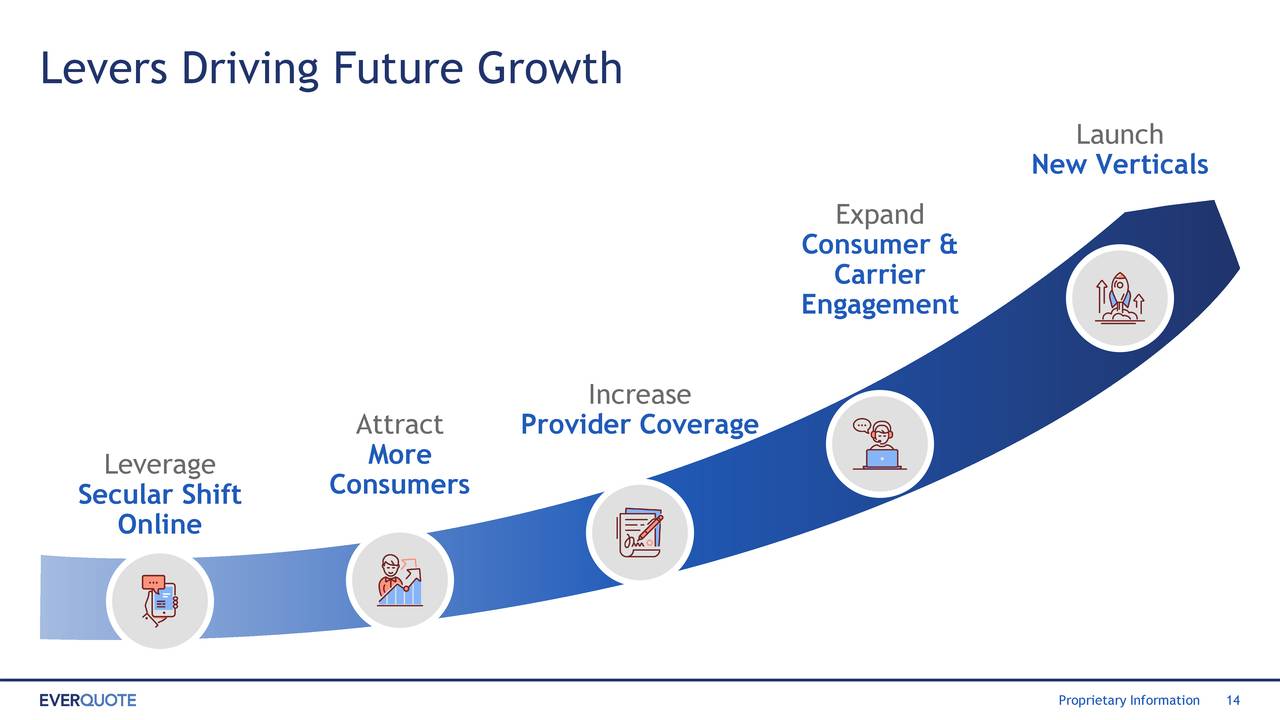 One of the structural tailwinds EverQuote is benefiting from it that insurers are shifting their marketing online. 70% of consumers look for insurance online, but as 80% of policies are still closed offline, there is a world to win here (from the earnings deck): 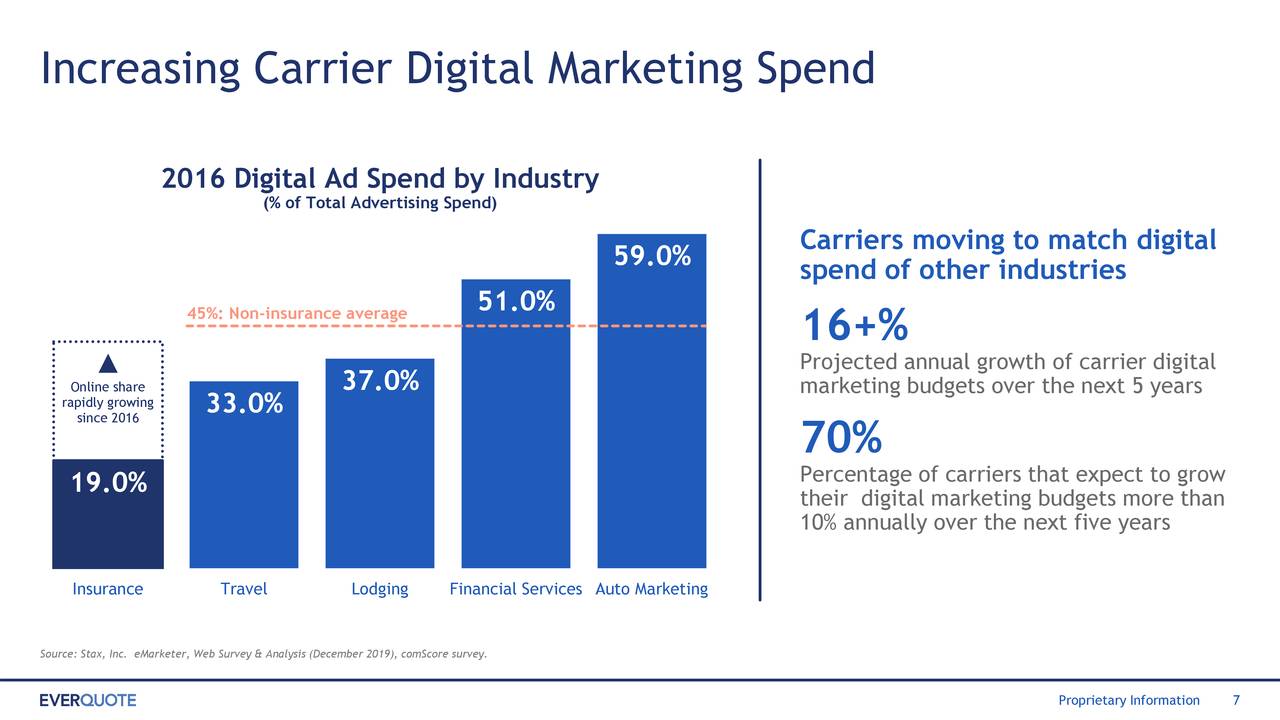 And as we argued in our previous article, online marketing has advantages, as it generates more precise data (from the earnings deck): 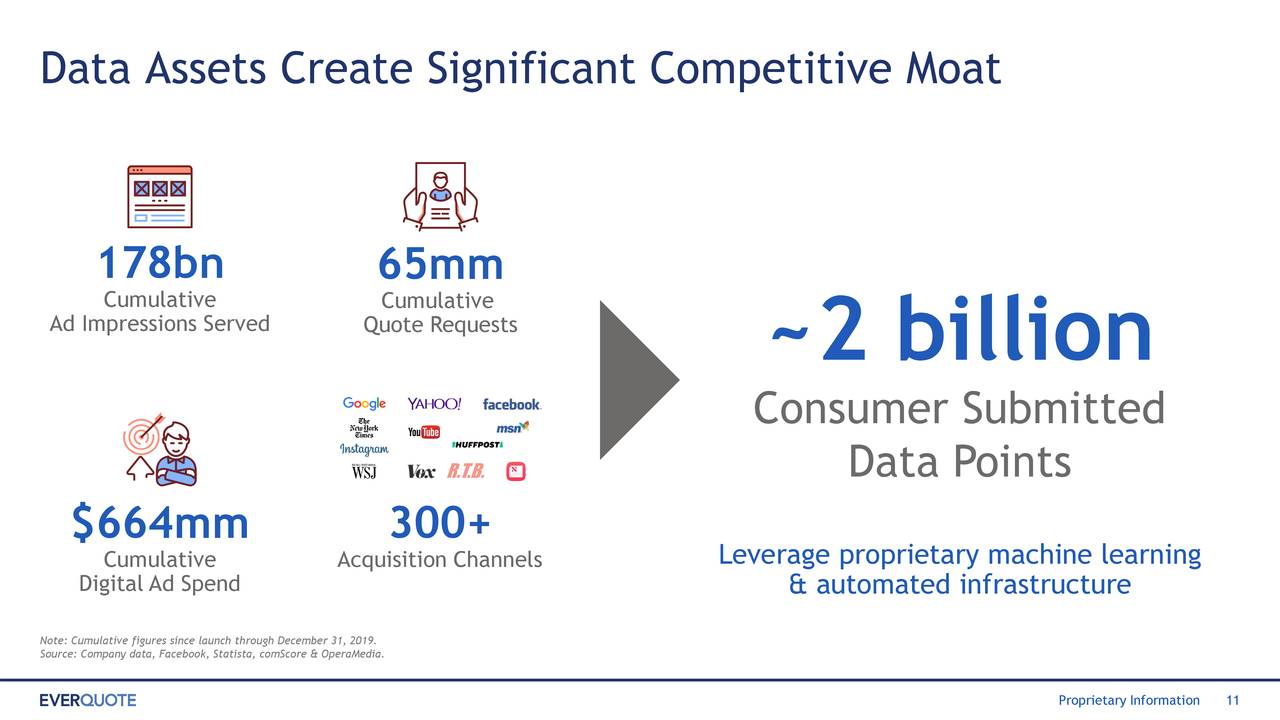 It’s instructive to compare these numbers with those provided in the November 2019 IR presentation: 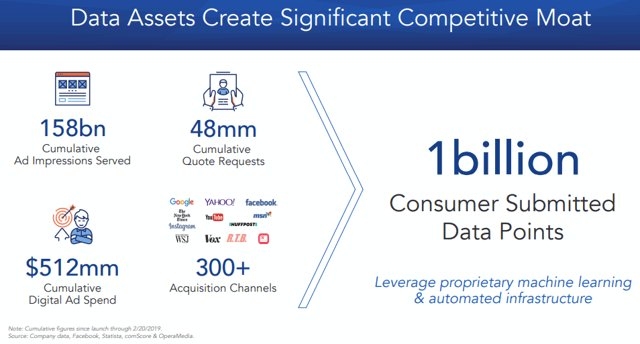 The amount of consumer submitted data points doubled in a fairly short time and without any of the other metrics on the acquisition side anywhere near doubling, clearly pointing to increasing returns in data generation.

This data deluge will then be used to increase the customization of both marketing campaigns as well as a better matching of consumers and policies (from the earnings deck): 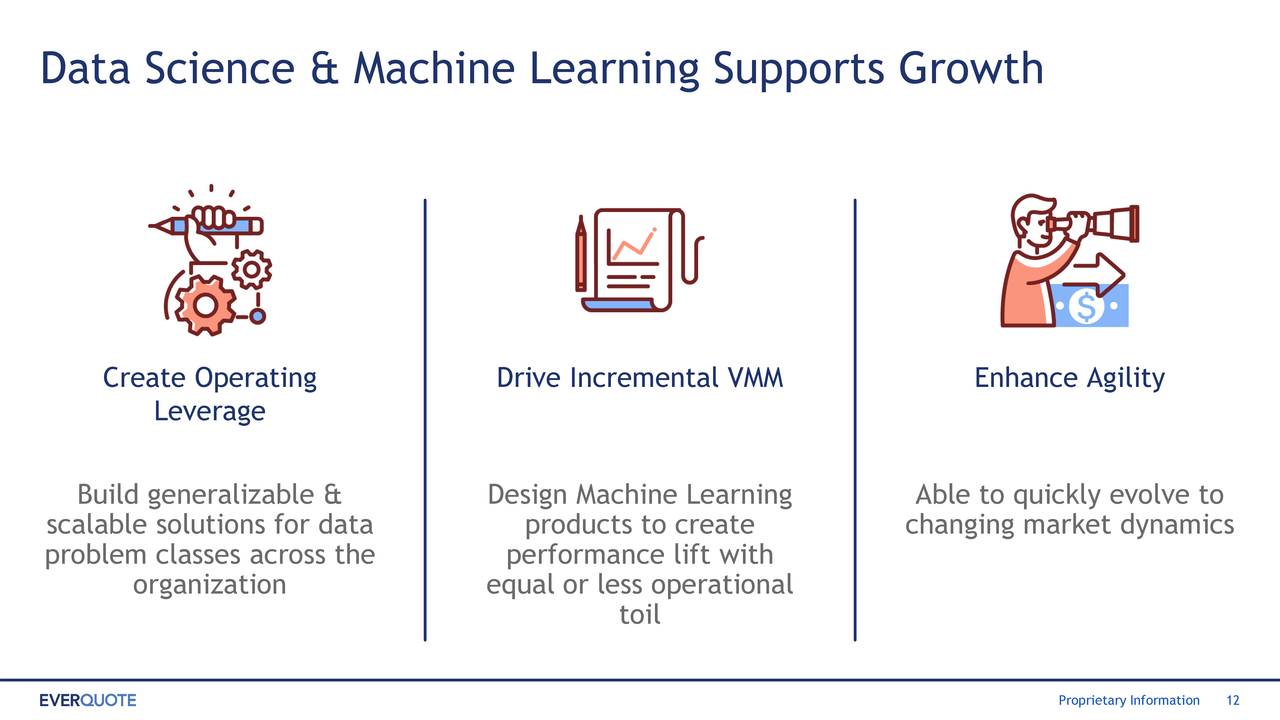 And this tends to be a bit of a flywheel with increasing returns (from the earnings deck): 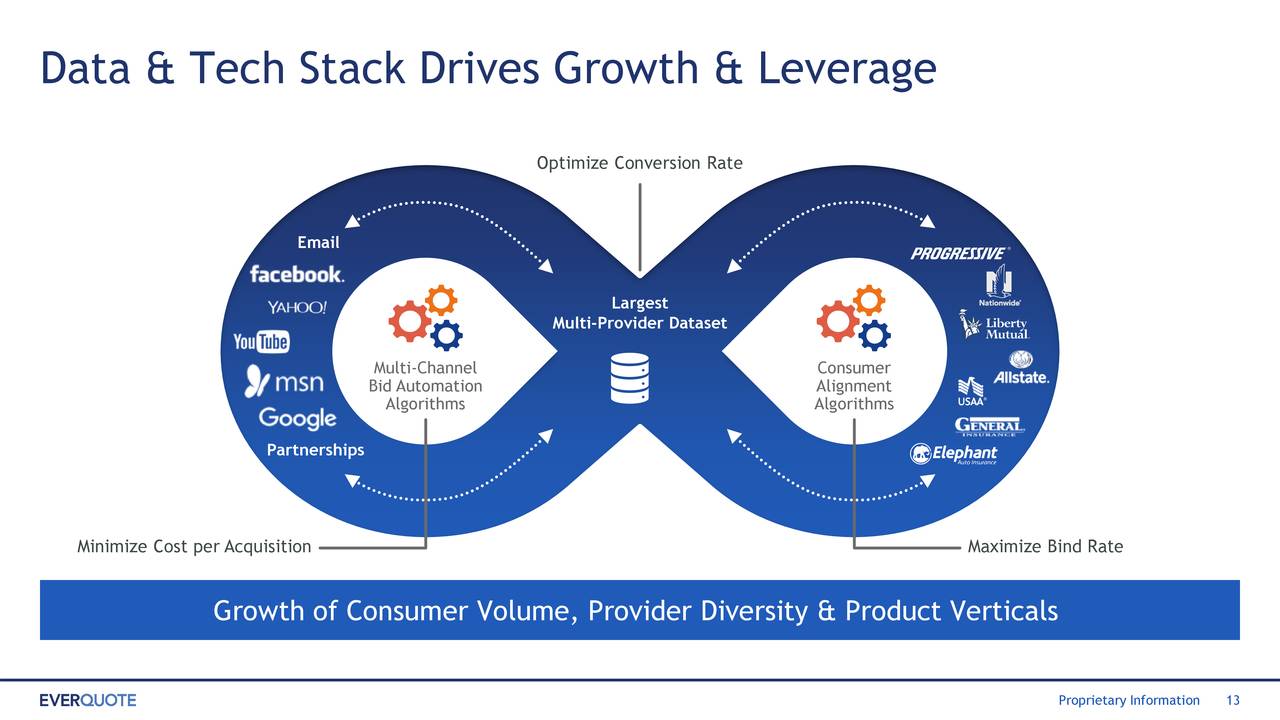 One of the metrics where this shows up is in the company’s VMM, or variable marketing margin (from the Q4CC):

Turning to our variable marketing margin or VMM, defined as revenue, less advertising expense, which is our north star for managing the profitable growth of our marketplace. We delivered fourth quarter VMM of $21.8 million, an increase of 113% year-over-year, which exceeded our guidance provided last quarter.

Another metric which is indicative is the revenue per quote request, which we’ll discuss below in detail, but here it suffices to say that management believes that this is a lever driven by Big Data and machine learning.

This infrastructure can also be leveraged by adding new insurance sectors, which is exactly what EverQuote is doing entering markets like life insurance, home and renters, and health (from the Q4CC):

We delivered 78% revenue growth in Q4 year-on-year in autos, while diversifying our business with growth in our other verticals, which consists of home, renters, life, commercial and health and which grew 130% in Q4

Another growth avenue is adding carriers (insurance companies). The company added 14 new ones during 2019. Still, existing carriers are responsible for most of the revenue, as more than 95% of revenue from carriers in the quarter came from those who have been on the platform for more than a year.

We struggle to see a short case, at least we have some problems with that. The argument, from SA:

an anonymous post at Value Investors Club put forth a short thesis describing the firm as a “bad click-bait business.” via Bloomberg. Sees revenue growth as “overstated” as website traffic is decreasing though it’s experiencing a one-time step up from externally sourced traffic, according to the post.

However, simply take a look at EverQuote’s growth track record (from the earnings deck): 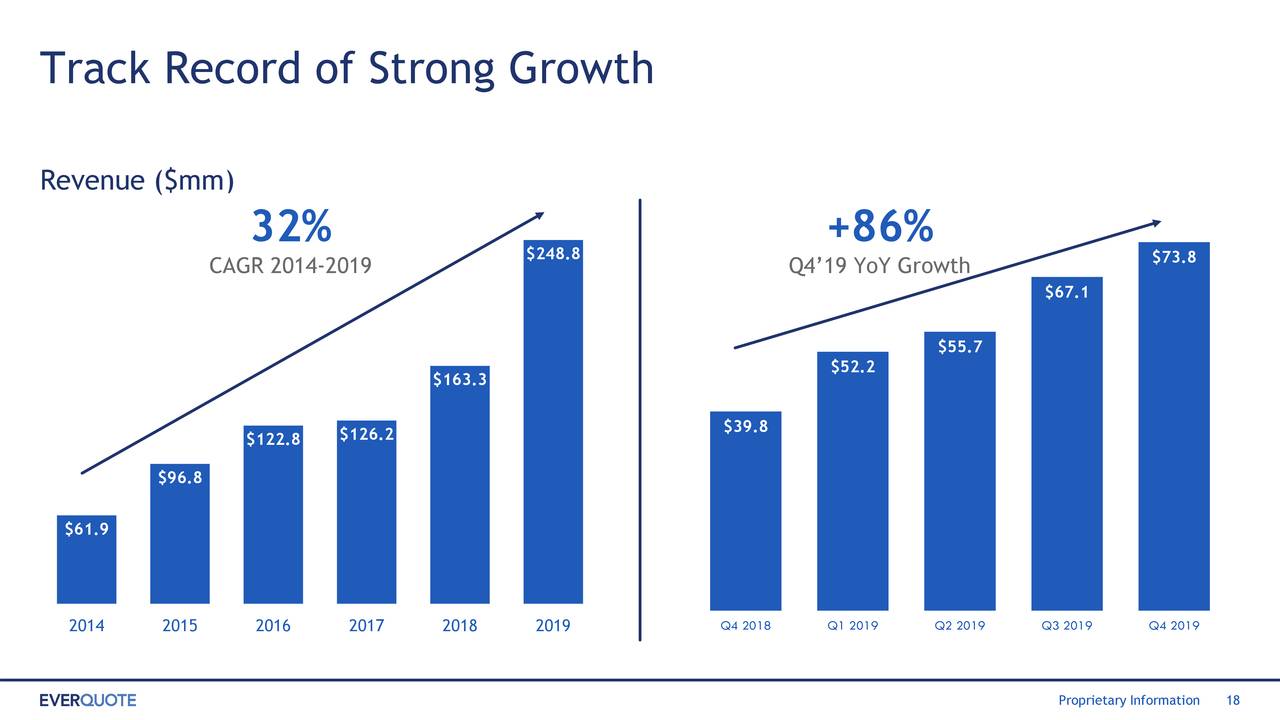 It’s difficult to argue that growth is a one-off, and even if it’s based on “bad clickbait,” it is clearly producing growth over at least a five-year period. Clickbait, even bad ones, apparently work.

There is indeed an acceleration in 2019, but this could be ascribed at least in part to new verticals, apart from the “externally sourced traffic” (like the verified partner program and social) the shorts suggest.

It could very well be that growth reverts to more normal levels. After all, at the IPO, management was talking about a 20% growth rate for the company, and in Q4, it’s been more than four times that. The main driver of growth is still the quote request volume (+79% in Q4).

It’s clear the request volume has really taken off in the last three quarters (although, to be fair, 2018 was a bit of a dip). But it is indeed quote requests that is driving much of the growth, though one should keep in mind this is in part quote request for policies in new verticals.

Since that volume experienced a huge increase in 2019, it would not surprising if revenue per quote request is down a little, but instead, that too is up (+4% in Q4). From the Q4CC:

For the year as a whole, there actually was a small (3%) decline in revenue per quote requests, but this is hardly alarming. Cost per quote request is also down, so we see little reason to fear a wholesale deterioration of the quality of the company’s traffic acquisition economics. As long as that holds up, that is quite a powerful data point against the shorts, in our opinion. Management also doesn’t seem worried (from the Q4CC):

And we do think again, we’re really confident that over the longer term revenue per quote requests, referrals for per quote requests are a lever in our business and it’s one of the reasons you see us now investing in distribution as we head into the year.

And it’s no surprise what they think is driving this (from the Q4CC):

And not all consumer marketing channels are created equal. Some obviously generate a high volume of arrivals or visits to a lower volume of quote requests and vice versa. I’s one of the bigger levers we have in our marketplace and something that we’ve seen play out is using machine learning tools to deliver the right bid, the right basically conversion rate adjusted bid for traffic also helps us drive up that conversion rate and drive higher intent traffic into the marketplace. And we’ve seen a success with our new bidding strategies and our machine learning algorithms specifically for bidding.

The FY guidance seems quite conservative to us, given the acceleration that happened in H2 2019.

Cash flow has also markedly improved and is now positive, and the company has $46.1 million in cash.

While it might not keep on growing at the torrent pace of the last couple of quarter, there are no signs the economics of quote request acquisition is deteriorating, which would be a main data point underpinning a short thesis.

In fact, management expects Big Data and machine learning to produce improvements, and given the more traditional operational leverage, one could even argue that EverQuote could accommodate some deterioration in quote request economics.

With the company growing briskly, entering other verticals and being already cash flow-positive, we see further upside in the share price, as we think the shares are actually quite moderately priced.

Disclosure: I/we have no positions in any stocks mentioned, but may initiate a long position in EVER over the next 72 hours. I wrote this article myself, and it expresses my own opinions. I am not receiving compensation for it (other than from Seeking Alpha). I have no business relationship with any company whose stock is mentioned in this article.