Canada’s central bank held the benchmark overnight lending rate steady at 0.25% this morning – in line with the expectation. Canada’s overnight rate is now 1.50% lower than it was prior to the initial cut in early March. 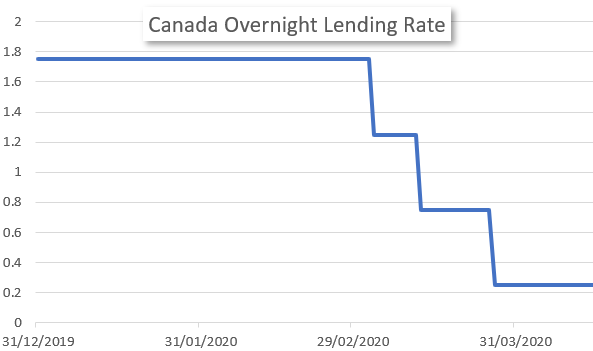 Following the emergency rate cut to close Q1, BOC has remained steady at 0.25% in a decision to avoid further approaching a negative rate. While rates have held, the much anticipated OPEC+ deal to cut some 20M B/D has done little to calm investor’s worries over the battered commodity. This could be a driver for CAD weakness as the month continues to unfold.

Although the Canadian Dollar has been continuing to show strength since late March, certain markets such as CAD/JPY have begun to unravel. USD/CAD has been putting in lower highs and lower lows for the better portion of the past month; meanwhile, CAD/JPY has still remained nearly 2.5% off of March highs. That being said, the Canadian Dollar has nonetheless broken under much macro pressure. After retesting monthly lows, USD/CAD price action appeared to be forming a double bottom pattern, and is currently 1.70% above monthly lows.

Key Talking Points: NZD/USD stuck in a range despite RBNZ increasing odds of a rate hike The Fed is heading in the right direction but needs to change gear to keep up NZD/USD is bouncing […]