Odds that the US economy will soon slip into a recession are likely back on the rise. This follows our prior US Recession Watch that highlighted a downshift in recession probabilities and the US-China trade war late last year.

Now, as the coronavirus hits confidence and sends a shockwave across the global supply chain, economic data is starting to deteriorate rapidly.

A gloomy Markit PMI report just revealed that US business activity – notably in the services sector – contracted during February.

US recession odds have been rekindled in response, which is reflected by the abrupt pivot lower in the US Dollar (USD) alongside a deepening of the US Treasury yield curve inversion (3m10s) after the data released. But will the move last?

Chart created by @RichDvorakFX with TradingView

A staggering rally in USD price action across major currency pairs since January 01 pushed the Greenback up 3.5% on balance prior to the February 21 selloff sparked by the Markit PMI contraction.

Technical support was initially provided to USD price action around its 9-day exponential moving average. Although, the US Dollar has potential to keep bleeding.

Perhaps the 23.6% or 38.2% Fibonacci retracement levels of the recent bullish leg will be looked toward as possible downside targets by USD bears amid a likely acceleration in FOMC rate cut bets.

Nevertheless, the US Dollar’s near-vertical ascent during the first seven weeks of the year seems underpinned by widespread demand for safe-haven currencies, which is a facet of the forex market where USD reigns king.

The US Dollar Index has correspondingly formed a bullish golden cross of its longer term 50-day and 200-day simple moving averages. In theory, this impending technical development might provide a positive tailwind to USD price action.

While the total economic impact caused by the novel coronavirus outbreak is yet to be determined, preliminary indicators and measurements of business activity paint a pessimistic picture.

China car sales during the first two-weeks of February cratered 92% year-over-year. A recent survey of sales managers at Chinese companies shows that business confidence fell off a cliff to its lowest reading on record.

Around half of the 109 US businesses polled with operations in China noted a material lack of workers due to widespread travel restrictions and quarantines mandated by the Chinese government.

The Chinese economy is only operating at about 55% of capacity according to a recent report from the Ministry of Commerce.

Learn how to analyze and react to real-time market news

Meanwhile, tourism across Asia is at a standstill judging by Hong Kong average visitor arrivals data, which crashed to under than 3,000 travelers per day and compares to last year’s figure of 200,000 per day.

In turn, Song Xiaowu, a Chinese economist and government policy advisor, stated that China may need to adjust its 2020 GDP growth target as first quarter growth could drop to 3%.

The unexpected and debilitating shockwave sent to the global supply chainwill likely have a lasting impact on business activity above all else. This fundamental backdrop typically bodes well for the USD on balance.

Considering how China is the second largest economy in the world, it is expected that the hit directly to Chinese GDP will drag total trade and business activity lower across the globe in a similar fashion.

This theme was just highlighted in a study published by the World Trade Organization on how global merchandise trade growth is likely to weaken further into 2020.

Meanwhile, American businesses have already started to sound the alarm bell. Apple Inc (AAPL) – the biggest US company by market cap – announced it sees its revenue at risk and not expected to hit its revenue guidance for the quarter owing to the coronavirus outbreak. 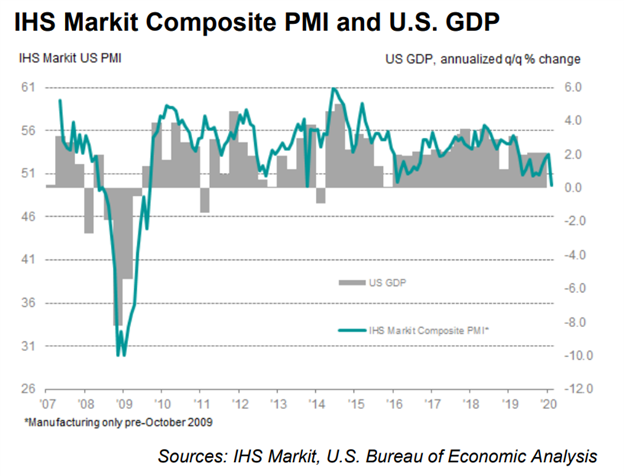 As previously mentioned, the latest flash PMI report from IHS Markit revealed that US economic output contracted for the first time since October 2013. The composite output index took a tumble to 49.6 for February and is down from a reading of 53.3 the month prior.

Even more worrisome than the composite PMI figure was the nosedive in the services business activity index, which fell at the fastest rate on record to a fresh 76-month low.

The latest Markit PMI report has consequently brought the overall resilience of the US economy into question as business activity contracts. At the same time, recession odds seem set to rise seeing that the services sector is a primary component of US GDP.

Risk of recession permeating across the broader market can be observed by taking a look at the US Treasury yield curve given its historical usefulness in predicting potential economic downturns.

A notable flattening of the US Treasury yield curve has occurred since traders caught wind of the novel coronavirus outbreak earlier this year.

Specifically, the 3m10s and 2s10s yield curve spreads dropped from 30-bps and 34-bps respectively at the beginning of the year to the latest measurements of -0.06% and 0.13%. 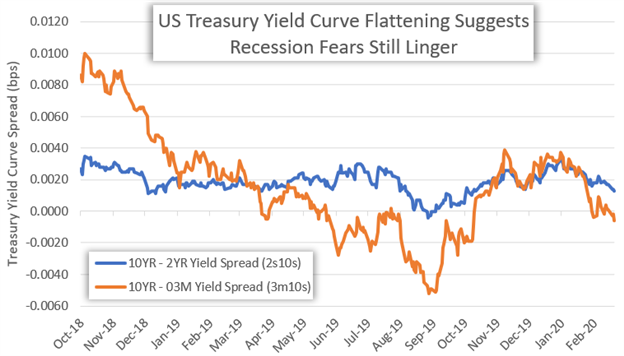 This largely stems from the anticipated drag on global GDP growth as investors flock to safety provided by long-dated government bonds such as 10-year or 30-year Treasuries.

With the US Treasury yield curve inverted once again along the 3m10s curve (i.e. the three-month and 10-year maturities), market sentiment could deteriorate further as investors take notice of rising recession odds.

Nevertheless, the US economy is and will likely remain the ‘best out of a bad bunch’ due to solid consumer spending and a strong jobs market.

Upcoming nonfarm payrolls and US consumer confidence reports could thus carry greater credence regarding USD price action, broader market sentiment and the risk of a recession.

Connect with @RichDvorakFX on Twitter for real-time market insight