Natural gas prices are nearly 10% higher for June as a record-breaking heatwave scorches the western United States. The unusually high temperatures extend from California out to the Great Plains, covering thousands of miles across cities and rural areas alike. Over a dozen locations saw new records set last week, according to the National Oceanic and Atmospheric Administration’s (NOAA) Alex Lamers, a meteorologist with the agency’s Weather Prediction Center.

The extreme weather has people cranking up their air conditioning units, placing heavy demand on electric grids. In fact, soaring temperatures are placing such enormous demand on the grid that a hydroelectric power plant in California may suspend operations for the first time in over 50 years. State officials estimate the power generator has two to three months left to operate at the current pace, highlighting the strain caused by the heatwave.

The triple-digit temperatures have caused grid operators and elected officials to ask residents to conserve power, with California declaring a state of emergency. Moreover, the western United States is facing severe drought conditions in areas, stressing hydropower generation. That said, other energy sources – including natural gas – are soaking up an outsized chunk of energy demands.

Furthermore, according to the National Weather Service, the harsh temperatures are expected to extend into this weekend. Meteorologists expect temperatures to rise 20 degrees above average into early next week, with the Northwest expected to see some of the highest mercury readings. Energy demand will more than likely continue to fuel demand-side pressures on natural gas prices.

Natural gas appears to have successfully recaptured a September 2020 trendline, with the latest swing low confirming the level as support. The 20-day Simple Moving Average (SMA) appears to have also offered a degree of confluent support. The heating gas’s technical posture looks primed to provide prices a chance to tackle the 2020 high at 3.396.

However, the recent swing high at 3.369 or the former 2021 high at 3.316 may pose as resistance before testing that area. That said, the latest rally broke through negative divergences in both the RSI and MACD oscillators, negating possible bearish signals. Alternatively, if prices do drop, the 20- and 50-day SMAs may provide downside support. 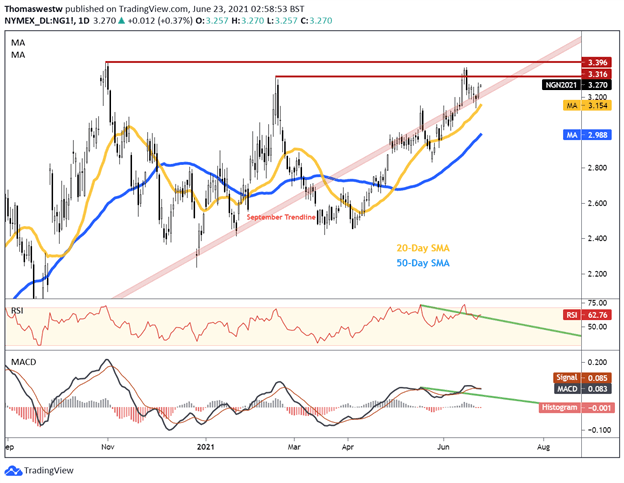