Like most other equities, LTC has had a rough time of it in the latest market pullback, falling from the high $40s, down to the mid-$20s: 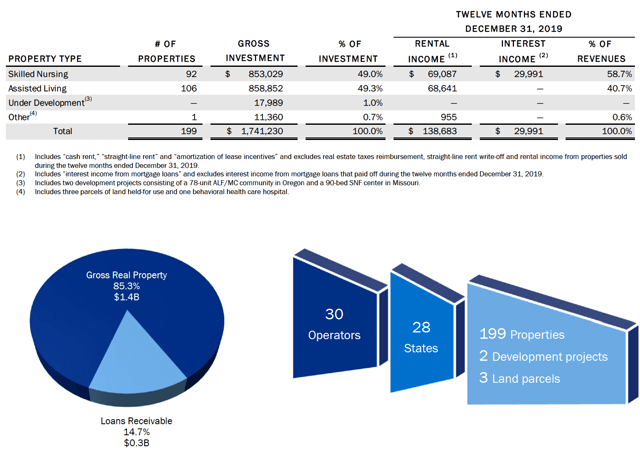 Management has concentrated on states with the highest forecasted rates for geezer growth over the next 10 years. Texas and Michigan top the list, comprising over 32% of total gross investment, and are heavily weighted toward skilled nursing facilities, forming over 55% of LTC’s SNF investments: 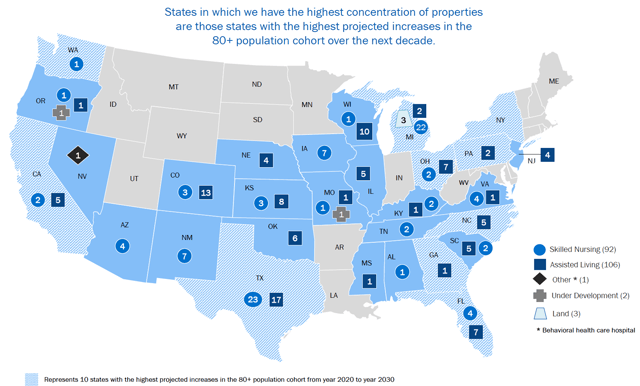 Like many of the income vehicles we’ve covered in our recent articles, the market pullback has pushed up LTC’s dividend yield to heights not seen in years.

Management typically pre-announces the dollar amount and the ex-dividend and pay dates for the upcoming quarter.

Given LTC’s lagging performance during the pullback, an alternative to buying it outright would be to sell cash secured puts below its current price/share.

If you’re more bullish on LTC, and you think that the current low prices are going to last beyond mid May, there’s also a high-yield covered call trade which expires then.

You can see more details for these two trades on our free Covered Calls table and Cash Secured Puts table.

Funds Available for Distribution rose by 6.66%, while FFO/Share growth was flat, at just .65%. Adjusted EBITDAre, (the “re” stands for real estate), slipped by -2%: 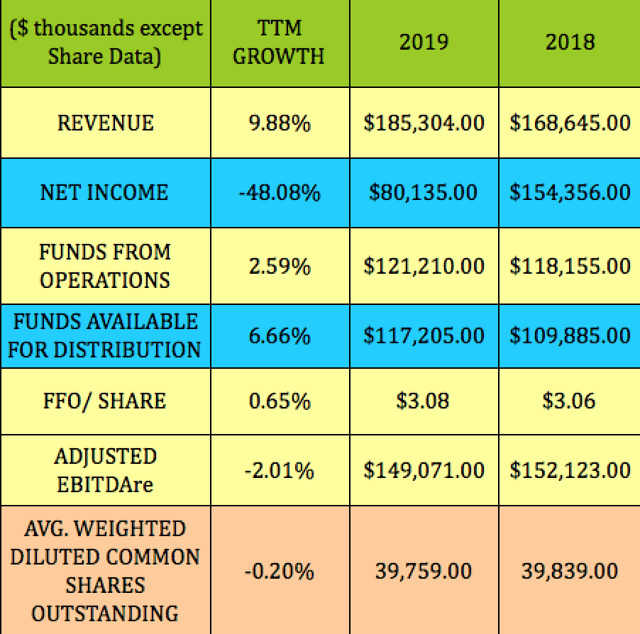 In January, LTC announced a $33M investment in three properties in Michigan and Texas with operators new to LTC. The two Michigan properties are located in Auburn Hills and Sterling Heights include a total of a 156 assisted living and memory care units and closed right at the end of 2019. LTC acquired them for $19 million with an additional capital improvement investment of approximately $2 million to be deployed in the first year of the lease.

– LTC just announced the completion of the sale of its largest holding this week – Preferred Care, which accounted for 19.4% of its income. LTC previously communicated that it anticipated concluding the sale during the second quarter of 2020 but finalized the transactions ahead of schedule.

The combined net proceeds for the Preferred Care portfolio, including one property sold in 2019 and 21 properties sold in the first quarter of 2020, was $77.9M, resulting in a total estimated gain on sale of $44M. The portfolio had a combined net book value of $35.6M.

The 21 properties sold in the first quarter of 2020, which included more than 2,500 beds across Arizona, Colorado, Iowa, Kansas and Texas, were sold through multiple transactions and generated net proceeds of $71.9M.

LTC’s quarterly same property stats are based on operator financial statements for the trailing periods ending 6/30/19 and 9/30/19. The occupancy rates for the operators appear stable in both segments, at ~87% for assisted living, and 80% for skilled nursing.

The assisted living segment had more stable EBITDAR and EBITDARM figures during these periods, whereas the SNF segment showed a -5.8% decline in EBITDAR and a -4.4% drop in EBITDARM:

LTC’s price decline has pushed its Price/FFO valuation lower than industry averages, at 8.62 vs. 10.64. It also looks cheaper on an EV/EBITDA basis, and slightly cheaper on a price/book basis, while its dividend yield is a bit lower than the group average.

Its debt coverage ratios have been pretty steady over the past three years: 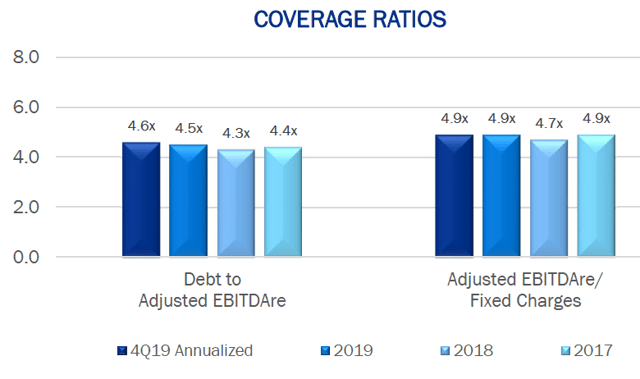 Senior Housing operators have low margins, which could be further pressured by economic fallout in a recession. LTC’s management had to deal with operator delinquency issues in 2019, including Thrive, and Senior Care Centers. The bankruptcy court allowed Senior Care to assume their LTC lease over LTC’s objections, but LTC received all monies owed, including all past due rent and legal fees. Senior Care continues to get short extensions to emerge as they work to finalize their exit financing. As of late February, LTC’s management expected Senior Care to emerge from bankruptcy sometime in March.

When Thrive continued to not perform, LTC transitioned that portfolio to three separate regionally-based operators, which management feels are better capitalized. LTC’s triple net leases give them the power to vacate facilities which are occupied by non-performing operators, but this can be a lengthy process.

All tables by DoubleDividendStocks.com, except where noted otherwise.

We scour the US and world markets to find solid income opportunities with dividend yields ranging from 5% to 10%-plus, backed by strong earnings.

We publish exclusive articles each week with investing ideas for the HDS+ site that you won’t see anywhere else.

We offer a range of income vehicles, which can offer you defense vs. this latest market pullback.

Disclosure: I/we have no positions in any stocks mentioned, but may initiate a long position in LTC over the next 72 hours. I wrote this article myself, and it expresses my own opinions. I am not receiving compensation for it (other than from Seeking Alpha). I have no business relationship with any company whose stock is mentioned in this article.

Additional disclosure: Our DoubleDividendStocks.com service has featured options selling for dividend stocks since 2009.
It’s a separate service from our Seeking Alpha Hidden Dividend Stocks Plus service.

Disclaimer: This article was written for informational purposes only, and is not intended as personal investment advice. Please practice due diligence before investing in any investment vehicle mentioned in this article.