What appears to be coordinated action by the world’s major central banks to counter the economic impact of Covid-19 will likely continue to help stabilize global stock indexes, including London’s FTSE 100, but there could be some disappointment that the G7 governments seem less willing to act.

The markets are also inferring an 82.3% likelihood of a 10 basis points reduction in March by the European Central Bank and an 85.5% chance of a quarter-point March cut by the Bank of England. In the meantime, the Reserve Bank of Australia has already cut its official cash rate by 0.25 percentage points to a record low 0.5%.

Nonetheless, the G7 group of governments is not expected to make a direct call for fiscal easing in a statement due today or tomorrow, and that is holding back GBP/USD, which continues to hover around 1.28 with no clear sign of a sharp move either up or down.

By contrast, the FTSE 100 is rallying after the recent sharp retreat in global stock markets and there is little to suggest any further sharp falls near-term. 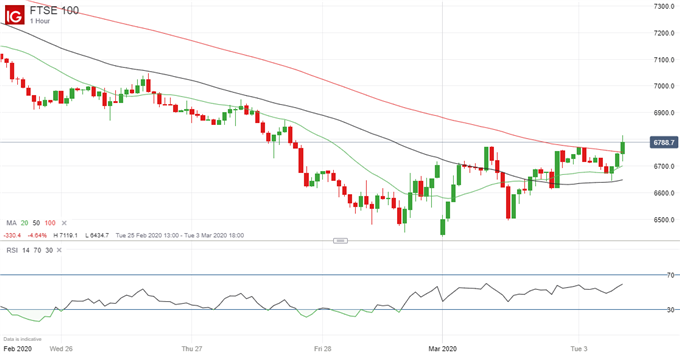 Against this background, Brexit has ceased to be a factor in the Sterling markets for now despite signs that the UK will tray to strike a hard bargain in its trade talks with the US, matching its tough stance in negotiations on the future relationship between the UK and the EU.

Feel free to contact me via the comments section below