Libya’s oil production has dropped to just 120,000 b/d as a result of conflict between the two major factions. The UN recently adopted a UN resolution to find a lasting ceasefire.

I am hopeful that the US will continue their efforts to broker peace so that Libya’s economy can slowly rebuild and work towards prosperity for all Libyan people. We urgently need US leadership to help end the oil embargo, not just to avoid a financial crisis, but to prevent major damage to national infrastructure. Every day that passes with oil sitting in pipelines increases the damage to our infrastructure, increases the pollution risks from leaks and reduces our ability to quickly resume oil production.”

On February 23rd, a draft ceasefire agreement has been reached at the second round of the Libya military talks brokered by the UN at Geneva, UNSMIL reported today:

UNSMIL reported that the second round of the 5+5 Libyan Joint Military Commission (JMC) talks to reach a lasting ceasefire and to restore security to civilian areas concluded on 23 February in Geneva.”

UNSMIL said that the two parties agreed to present the draft agreement to their respective leaderships for further consultations and agreed to meet again in March to resume the discussions and complete the preparation of the Terms of Reference of the sub-committees in charge of the implementation of the agreement.

It renewed its call for both parties to fully abide by the current truce and the protection of the civilian population and properties and vital infrastructure.”

It could mean the resumption of about one million barrels of oil per day. This would come at a time when oil prices are weak due to the demand destruction as a result of COVID-19.

Sophisticated traders and investors should consider a position in the ProShares UltraShort Bloomberg Crude Oil ETF (SCO). However, it is a double-short oil position which entails high risk. The thesis is explained further below.

Libya’s oil production had been in an uptrend, reaching nearly 1.2 million barrels per day in November 2019. Turmoil in Libya has, from time to time, disrupted supplies, but its contribution to OPEC’s output has been reasonably steady since the recovery began in late 2016. 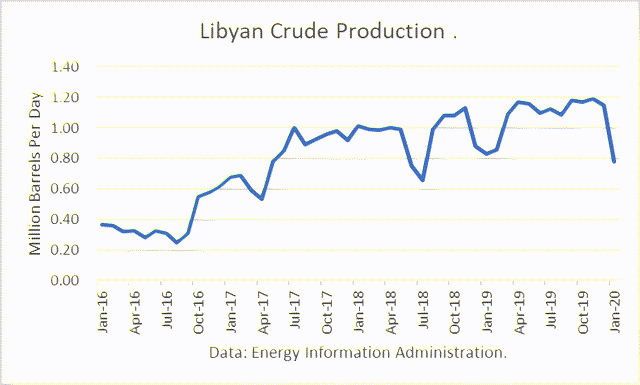 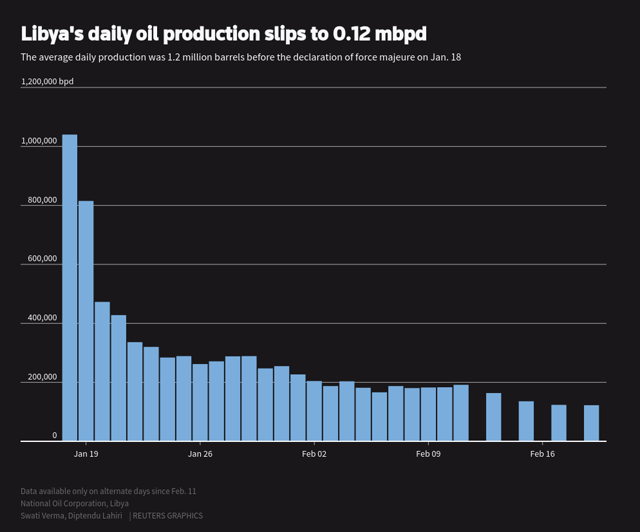 The top diplomat in eastern Libya told The Associated Press that the shutdown of vital oil facilities in the country would come to an end “when Libyans are guaranteed of the fair distribution of their resources.” The LNA has accused the country’s UN-recognized government (“GNA”) of using money to hire mercenaries from Turkey, while the GNA has accused the LNA of hiring Syrian mercenaries. The LNA also wants the government to be more transparent with the distribution of oil revenues from the Libyan Central Bank.

About $1.85 billion has been lost due to the oil closure, the National Oil Company said. The country cannot function without the oil revenues.

The UN Security Council in New York adopted a resolution calling for “lasting ceasefire” in Libya’s ongoing conflict on February 12th. The resolution calls for continuing talks between the factions in Geneva under the auspices of the UN and a UN arms embargo. “We have taken a big step forward towards solving the Libya conflict,” said German Foreign Minister Heiko Maas. “The results of the Berlin Libya conference are now binding for all sides.”

The talks are underway again, according to a spokesman for the United Nations Support Mission in Libya. “It is not that one side is back, it is one side came back with the intention to move forward, which is different,” Ghassan Salame, the UN envoy to the country, said after talks on Thursday.

UN Libya envoy Ghassan Salame said there was “more hope” this time because of the adoption of the UN Security Council resolution. The UN plans wider talks involving all political factions in Libya in one week in a very ambitious timeline.

For those who are interested in going short WTI crude oil but do not want to manage an oil futures account, there is a double-short exchange-traded fund, SCO. According to Yahoo Finance:

“The investment seeks daily investment results, before fees and expenses, that correspond to two times the inverse (-2x) of the daily performance of the Bloomberg WTI Crude Oil Subindex. The fund seeks to meet its investment objective by investing, under normal market conditions, in futures contracts for WTI sweet, light crude oil listed on the NYMEX, ICE Futures U.S. or other U.S. exchanges and listed options on such contracts. It will not invest directly in oil.”

Its top six holdings are as follows:

SCO is a leveraged product, and so, the volatility may be very high. It is not appropriate for novices. Oil prices are volatile, and SCO has twice the volatility of oil prices.

It is impossible to predict when a solution will be found, but the timing may not be long because neither side can last without receiving oil revenues. Once a ceasefire is announced and oil starts flowing again, there will be an additional one million barrels per day on the market, in addition to the demand destruction ongoing in China. That should send oil prices down below the recent lows, into the $40s for WTI.

Disclosure: I/we have no positions in any stocks mentioned, but may initiate a long position in SCO over the next 72 hours. I wrote this article myself, and it expresses my own opinions. I am not receiving compensation for it (other than from Seeking Alpha). I have no business relationship with any company whose stock is mentioned in this article.