On Tuesday, February 18, 2020, dry bulk shipping giant Golden Ocean Group Limited (NASDAQ:GOGL) announced its fourth quarter 2019 earnings results. At first glance, these results appeared to be very good as the company beat the expectations of its analysts on both the top and bottom lines. This may come as something of a surprise, given the pressure that the shipping sector has been under, given the trade war between the United States and China and the coronavirus outbreak that has ground much economic activity in China to a halt. It is important to note, though, that China is not the only nation in the world that is responsible for shipping traffic. In addition, the coronavirus outbreak was not present in 2019, so it is not going to have an impact until the first quarter. Overall, these results were reasonably solid and should please investors in the firm.

It is quite certain that the first thing anyone reviewing these highlights is likely to notice is that, essentially, every measure of financial performance showed marked improvement over the prior year quarter. In fact, most measures of performance also improved compared to the third quarter of the year. This is clearly visible here:

This would appear to run counter to what we have been hearing about struggles in the shipping industry caused by economic problems and the recent disease outbreak in China. One of the biggest reasons for this improvement was that short-term spot rates were higher in the fourth quarter than they were in the third. The company achieved an average time chart equivalent of $21,668 per day in the quarter across its fleet. In the third quarter, this figure was $19,727. It should be fairly obvious how this would result in the company’s operating revenues increasing since it was able to charge more money to move cargo across the ocean. All else being equal, the higher revenues mean that more money is able to move down to the bottom line.

Another factor that served to boost the company’s revenues is that it managed to secure a few long-term charters during the third quarter of 2019. I mentioned this in my last article on Golden Ocean Group. These charters were only in effect for part of the third quarter, so the ships did not receive the dayrate for these charters for the entire period. This was not the case in the fourth quarter as the ships were chartered for the entire time. This had a slight positive effect on revenues, but the impact from the higher spot rates was much greater.

One of the most important developments in the shipping industry is IMO 2020, which is a mandate imposed by the International Maritime Organization that all vessels must either burn low-sulfur fuel or be equipped with exhaust gas scrubbers to clean their sulphur emissions by 2020. For the most part, it is more cost effective to install the scrubbers, so that is the option that many, if not most, shipping firms have opted to take. As I mentioned in my last article on the company, Golden Ocean Group began working on an agreement with SFL Corporation Limited whereby SFL pays to install these scrubbers on seven of their vessels (that Golden Ocean is leasing), and Golden Ocean agrees to increase the lease payments. This is essentially a way to finance the scrubber installation, so that the company does not have to pay all of the money upfront. This may be a smart move, as, should Golden Ocean choose not to renew these leases when they expire, then it will not lose the scrubbers and the money that it spent upfront to install them.

As I mentioned in the highlights, Golden Ocean Group successfully refinanced a $284.0 million loan that the company initially used to purchase fifteen vessels. This loan was originally scheduled to mature in December 2019. Following the refinancing, the total balance due is $155.3 million, and it becomes due in five years. This did not significantly reduce the company’s overall debt load though, as all it really does is give it more time to finish paying it off. It does give us optimism, though, that companies in the shipping industry are still able to refinance their debt at fairly attractive rates as the interest rate on this loan is only LIBOR+2%. This may be a comforting fact, considering that there are a few liquefied natural gas tanker companies that need to refinance sizable tranches of debt later this year.

One of the nice things about Golden Ocean Group is that the company provides a rather detailed analysis of the dry bulk shipping industry in its earnings releases. This can help us better understand the company’s results and possibly where the firm is headed over the coming quarters. As mentioned earlier in the article, spot rates were higher in the fourth quarter than they were a year ago, but this was generally only true in the spot rates for Capesize vessels. We can see this here:

The vast majority of Golden Ocean’s vessels are Capesize vessels though, so the increase in rates for these vessels benefited the company more than the slightly lower rates for other classes of ship hurt it. We do see that overall spot rates were down across the board compared to the third quarter, but that quarter also saw the Baltic Dry Index reach its highest level since the fourth quarter of 2010. Thus, what we may be seeing is the market moderating slightly due a seasonal decline in Australian exports.

One thing that may surprise investors is that overall transportation of agribulks was up fairly significantly year over year. This is despite the trade tensions between the United States and China that saw the latter nation reducing imports from American farmers. In fact, seaborne transportation of these products was up 1.7% quarter over quarter and 12.4% year over year. It is important to keep in mind that China and the United States are not the only two countries that trade these products. With that said, the participants in the industry are optimistic that the talks between the two nations will result in further improvements in volume here.

The big problem that we see here is that the overall capacity of the global fleet continued to increase over the year as shipping companies took delivery of ships. At the end of the year, the total capacity of the global dry bulk fleet stood at 865.2 million dwt following deliveries of 40.7 million dwt. This is less than the 59.1 million dwt scheduled to be delivered in 2020. This could be a problem unless companies begin scrapping older vessels as the coronavirus outbreak has led to a decrease of shipping activity, particularly into China, and even Golden Ocean does not think that normal business activity will resume near term. Thus, the high level of new ships scheduled to join the fleet this year could prove to be a drag on fleet utilization and spot dayrates. In fact, we have already seen that happen so far this year as Capesize rates have collapsed: 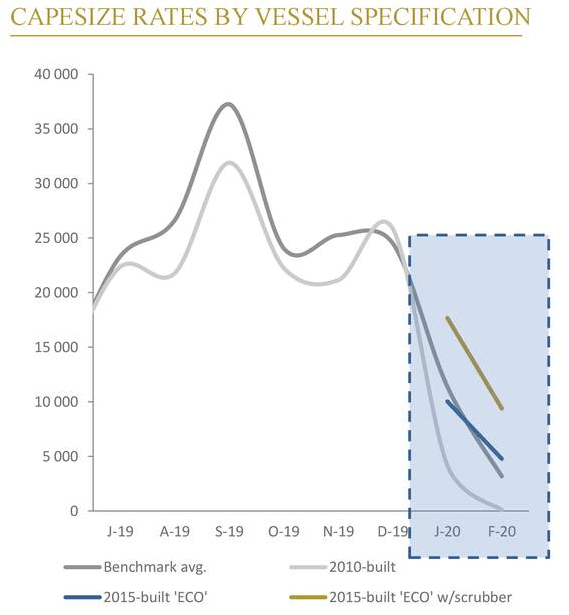 We can also see here that spot dayrates for older vessels have fallen much more than for younger vessels. This mirrors what we have been seeing in other maritime sectors. This might encourage shipping firms to scrap older vessels as the implementation of IMO 2020 and the decline in spot rates reduce the economic viability of these vessels.

Golden Ocean Group may be positioned to take advantage of this. This is due to the fact that the company has a relatively young fleet. As of the time of writing, the company’s 79-vessel fleet has an average age of six years, which is still relatively new and should prevent the company from having to scrap ships when its competitors do, and this may allow it to grab some market share once the industry eventually recovers.

In conclusion, then, this was certainly a reasonably solid quarter for Golden Ocean Group despite all of the concerns surrounding the industry. It does look like this may unfortunately be the best that it gets for a while, though, as the Chinese economy and the coronavirus have clearly begun to weigh in the industry. There is, thus, the very real chance that the company will struggle until this is resolved. Fortunately, Golden Ocean does appear to be reasonably well-positioned for when the industry eventually comes back.

At Energy Profits in Dividends, we seek to generate a 7%+ income yield by investing in a portfolio of energy stocks while minimizing our risk of principal loss. By subscribing, you will get access to our best ideas earlier than they are released to the general public (and many of them are not released at all) as well as far more in-depth research than we make available to everybody. We are currently offering a two-week free trial for the service, so check us out!