Once China’s economy is back online, it will inevitably need tons of copper. Before the coronavirus, the government had planned to give a boost to economic growth:

No doubt there’ll be plenty of activity once the dust settles and China’s share of global copper consumption has grown tremendously over the years. Although global growth has slowed, the rebound in China is bound to have a disproportionately positive impact on copper demand and prices. I mentioned that copper seems ready to follow gold’s lead in a previous blog. 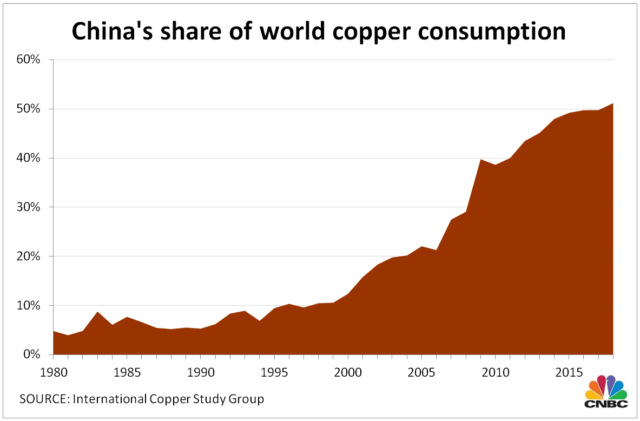 The question I promised to address was which stocks I’d consider the best way to play the pending increase in demand and trudging higher copper price. Some might play commodity futures, but that game is too highly leveraged for the likes of me.

I would generally pick a large cap leading copper miner, as well as a small (for more upside) exploration company to invest in. Why not go with the biggest publicly traded company to be sure? Freeport-McMoRan (FCX) is a leading international mining company with headquarters in Phoenix, Arizona.

Their portfolio includes long-lived geographically diverse mines including Grasberg in Indonesia, one of the biggest copper and gold deposits in the world. Other assets in North America include mines in Arizona (Morenci mineral deposit) and Cerro Verde in Peru. The company spent much of 2019 enhancing their mining operations and are nearing completion of the development of the Lone Star leachable ore body in eastern Arizona (near Stafford). Much of the enhancements (using new technology) is intended to increase productivity (and profit margins) as well as significantly reduce the need for capital spending.

FCX produced 1.9 million metric tonnes of refined copper in 2018, about 11% of the world’s total, making it one of the world’s largest copper suppliers. Freeport-McMoRan posted revenues of $18.7 billion in 2018. (thebalance.com)

The company generates lots of cash flow and enjoys one of the better debt/equity ratios (1.08 at end of December 2019) in the mining industry. Although it lost money in 2019 – remember that you buy cyclicals when they’re losing money, and sell them when they’re making money – in 2018, net income from operations was $2 per share. If we make a bit of a leap and call 2018 ‘normal’ earnings, the stock at around $11 is trading at around 5X normalized earnings. The stock has a 1.66% dividend yield which is pretty good for a mining company. What will drive the stock higher will be stronger fundamentals for copper (specifically, China’s economy ramping back up again and absorbing any remaining stockpiles).

On the smaller exploration and development front, I like Western Copper and Gold Corporation (WRN) – the company announced the below in a December 2019 News Release:

Of course, being an exploration company, don’t expect revenues or earnings for some time – most probably the company will be swallowed up in due course by a major. What is important then is management. Senior executives are all experienced miners (rather than stock promoters, which we often find in junior mining stocks). The President & CEO, Paul West-Sells has worked at BHP, Placer Dome, and Barrick in increasingly senior roles in Research and Development and Project Development. Dr. West-Sells has worked for Western Copper and Gold since 2006, where he has held a number of technical and executive positions, and is now the President and CEO overseeing the day to day operations of the company.

The Casino project is surrounded by other larger players in the Yukon such as Agnico Eagle (NYSE:AEM), Newmont (NYSE:NEM), Kinross (NYSE:KGC) and others. The company estimates that the deposit boasts 25 million ounces of gold, with continuing upside potential (see quote above). The company has no debt, and has been financed primarily by HNW individuals, with some participation by institutional investors. What I really like is that very few analysts even follow the company. With the strength in the price of gold over the past months, we are literally ‘living’ the catalyst for this exciting stock.

Disclosure: I am/we are long WRN. I wrote this article myself, and it expresses my own opinions. I am not receiving compensation for it. I have no business relationship with any company whose stock is mentioned in this article.