USD/CAD Makes a Comeback After Testing Below 1.3000

So far 2020 price action has marked a stark contrast in USD/CAD price action. The pair finished last year with a strong sell-off in the month of December, falling from an early-month-high of 1.3321 to test below the 1.3000 handle for the first time since October of 2018. That 1.3000 level brought in multiple items of support last year, helping to reverse bearish trends in July and October before finally succumbing to selling pressure on the final trading day of last year.

Since then, however, it’s been a far different story: What started as a pullback turned into a rally, helped along by a couple of Canadian drivers that came into the fray two weeks ago. An early-morning CPI print led into the Bank of Canada rate decision, and the BoC didn’t sound as optimistic as they had previously and this allowed for even more CAD-weakness to enter the mix as near-term rate cut bets got priced-in. That’s around the time that USD/CAD shot up to a key zone of resistance, running around the 1.3132 Fibonacci level up to 1.3150; and after holding bulls at bay for a couple of days, USD-strength took over as USD/CAD continued its pattern of higher-highs and higher-lows.

On a longer-term basis, USD/CAD price action finds itself in an interesting spot. Last year’s gyration in the pair had a net bearish reading, given the fact that the early-January high of 1.3664 led into the 1.2952 low set on the final day of last year. But so far in early-2020 trade, almost half of that move has been erased as a potent combo of both USD-strength and CAD-weakness has gotten priced back into the mix.

Will bulls be able to continue pushing, breaking that sequence of lower-highs that’s been building for the past half-of-a-year? 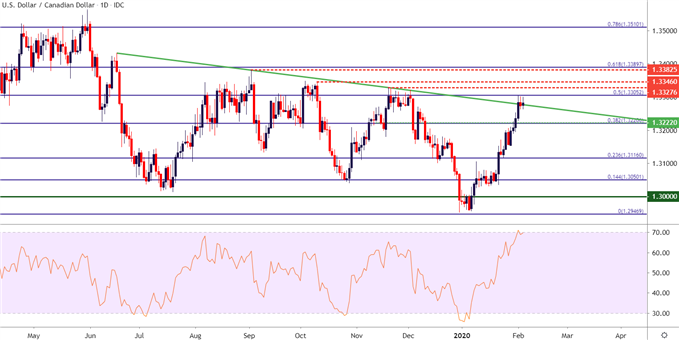 USD/CAD: Can Bulls Continue to Push Despite Overbought Conditions?

At this point, the near-term trend runs counter to the longer-term swing potential in the pair; and given the Friday drivers on the economic calendar, there’s a likely period for when a directional push might show. The Friday jobs reports out of both the US and Canada are likely to bring volatility into the mix, and for those looking at bullish continuation strategies, this could allow for a pullback in the pair as overbought positions cool. On the above daily chart, RSI has just entered into overbought territory, the first such occurrence on the Daily since January of last year just before the pair reversed by almost 500 pips.

From the four hour chart below, three potential support points have been identified that could be usable for either approach. 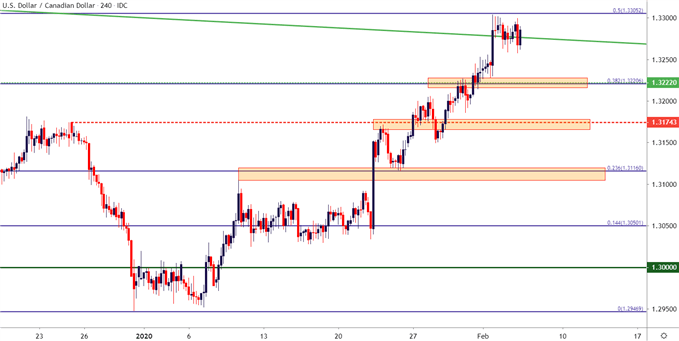