Nuance Communications Inc. (NUAN) is a Massachusetts-based software company whose business is primarily in artificial intelligence and speech recognition. It was formed after the merger between ScanSoft, which had roots in Xerox, and Nuance Communications in 2005. Owing to competitive pressure, NUAN has had to sell its imaging and automotive divisions in 2019. The company now focuses on providing healthcare and enterprise solutions. The new strategic approach is showing signs of bearing fruit with the company bouncing back to profitability and seeing a sizeable market appreciation. Therefore, an evaluation of key metrics inform a buy suggestion.

Figure 1 shows NUAN’s net profit margins over the last three years ending 2019. It is notable that this ratio has improved significantly since 2018 when it was a loss of 8.68% to 2019’s 11.73%. The inference is that NUAN’s management has made considerable enhancements in controlling costs. This deduction is particularly important given that NUAN’s revenues declined marginally between 2018 and 2019 as shown in Table 1. However, the company turned around its net income from a loss of $159.93 million in 2018 to a profit of $213.81 million in 2019. The primary contributor to this development is the management’s decision to simplify operations by focusing on its Healthcare and Enterprise segments. This necessitated the sale of those operations that had ceased contributing to profitability. The positive impact of the new strategy is evident in NUAN’s first quarter results ending December 2019. These are shown in Table 2 where the company’s net income increased significantly to $48 million compared to $19 million in 2018. Other outcome of NUAN’s renewed strategy are discussed in subsequent sections.

As shown in Figure 1, NUAN’s asset turnover increased significantly in 2019 (33.98%) compared to 2017 (29.13%) despite a brief dip in 2018. The company’s improved performance implies that it is deriving more revenues from its assets, which is a major indicator of efficiency. Asset turnover also increased significantly in the first quarter of fiscal 2020 compared to the previous year as shown in Table 2. These outcomes denote that NUAN’s new strategic approach is paying off by ridding off the company’s unprofitable assets.

This is further evidenced by the substantial growth in return on assets seen in the latest quarter and over the last three years ending 2019. Furthermore, Table 2 shows that the firm has substantially enhanced its efficiency in generating profits from existing assets. This is directly related to NUAN’s decision to dispose of unprofitable assets in 2018 moving forward.

NUAN is a highly leveraged company with its equity multiplier averaging 288.29% over the three years ending 2019. While the disposal of some of its segments has contributed to a reduction of this ratio to the current 248.99%, this indicator still has a negative connotation on the company. Firstly, NUAN operates in the highly unpredictable technology sector that is susceptible to rapid changes that could erode its cash flows. This factor is emphasized in Table 1 and 2 where the company’s operating cash flow, used in paying interest and the source of subsequent financing activities, declined sharply in 2019 compared to 2018. This was despite a significant increase from 2017 to 2018. While 2019’s decline is partly attributable to the sale of NUAN’s segments, it is also notable that the company lost about $19 million in sales in this period. These developments underscore the fact that excessive debt bears significant risk for the company should it fail to raise sufficient cash flows to pay of its liabilities.

Return on equity is driven by the net profit margin, asset turnover, and equity multiplier. Tables 1 and 2 show that NUAN’s ROE increased significantly over the last three years and in the latest quarter. This is due to there being a concerted effort by the company’s managers to increase profitability and asset efficiency by selling loss-making segments. However, it is also apparent that NUAN has relied on debt financing to attain these goals despite a decline in this item. Specifically, NUAN’s debt levels reduced from $4 billion in 2017 to $3.2 billion in 2019. Yet, the company’s equity multiplier remains high at 2019’s level of 249%. This makes the company vulnerable to price attacks by rivals as high leverage makes it necessary to retain high prices. A competitor who offers a cheaper identical service as NUAN will have dealt the company a significant blow to its cash flows and it may resort to a further sale of assets.

Figure 3 shows a considerable improvement in NUAN’s stock price between 2017 and 2019. Indeed, it is notable that the company’s market value has appreciated by 56% since December 2018, which is around the time NUAN announced its restructuring plan. Subsequent appreciation has also been driven by this plan bearing the intended results. Besides, NUAN has seen its price/earnings ratio increase from a loss position in 2017 and 2018 to 2019’s 45.72 and the current 43.66. Though, there has been a reduction in this indicator in the most recent quarter, the substantial improvement compared to previous years implies growing market confidence in NUAN’s stock. Specifically, the most recent P/E ratio infers that investors are willing to pay at least $43.66 for a $1 of NUAN’s earnings. Since a company’s share price has been defined as the summation of its future cash flows, an increase in the P/E ratio then signifies growth in investor confidence that it will generate adequate cash flows in the long-run. 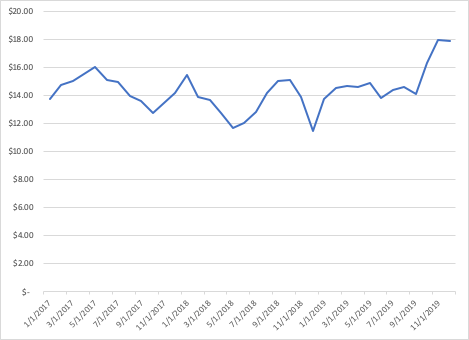 Owing to the sale of some of its businesses, NUAN’s enterprise value to EBITDA declined significantly from 42.20 in 2018 to 20.52 in 2019. However, this has since improved to 26.70 in the most recent quarter. This further highlights the market’s confidence in NUAN’s renewed strategic approach that is already showing signs of leading to positive results as discussed previously.

NUAN has sought to repurpose its business since making consecutive annual losses in 2017 and 2018. In the new model, the company is leaner and more efficient as it focuses on its healthcare and enterprise divisions. This approach has had positive results with profitability and asset efficiency improving considerably since 2018, both annually and quarterly. However, NUAN remains a highly indebted company, which exposes it to competitive attacks from larger rivals. Despite this drawback, the market has reacted positively to the recent changes at the company as indicated by the P/E and enterprise to EBITDA ratios. It is based on these factors that investment in NUAN is recommended. Specifically, the continued pursuit of a lean organization in a highly competitive market promises to further enhance profitability. More importantly, the restructured organization can be expected to attract substantial stock price increases in the medium to long-term.