The shares in Napco Security Technologies (NSSC) sold off on bad hardware number in Q2, but this very much looks like a one-off, caused by some mishap at its biggest distributor.

All the things the company has going for it remain in place: new products, market opportunities, rapidly rising recurring revenues producing lots of leverage and a healthy balance sheet. It’s a good moment to establish a position.

There are a number of growth vectors for the company:

While it’s true that Q2’s 4% revenue growth was disappointing, it’s actually not all that much of an outlier:

Management made a case that it was a one-off, nevertheless, and blamed a big distributor (which happens to be its biggest customer) cutting back on orders, as it is in the process of being acquired. According to management, the sell-through at that distributor remained high (at 15% y/y and 11% sequentially), which is doubly reassuring:

The company is also set to benefit from:

School districts have received a lot of public funding to bolster their access and security, and Napco is well-positioned to benefit from this trend even if it can’t always announce the wins. From the Q2CC:

NAPCO announces project wins at schools and universities when the opportunity is allowed for us as we must get approval to make these announcements. Our pipeline for school security projects remains robust.

Active shooter incidents also continue to happen in public places like houses of worship and other meeting areas. Our SAVI audit system, which is currently used in schools also has the ability to be used in these areas in order to help find security deficiency that need to be addressed.

The combined locking and access solution offers a competitive advantage, and security and access concerns are not limited to schools, needless to say.

The case for investing in Napco Security Technologies revolves mostly on the rising proportion of recurring revenues, as these are, well, recurring and produce much higher gross margin compared to equipment sales.

With respect to that, the Q2 figures didn’t disappoint. Recurring revenues had a strong Q2, growing 40% y/y and now reaching a $24 million annual run rate in December and roughly 20% of revenue.

Management argues it is still on track to reach a $40 million annual run rate at the end of the fiscal year in June, and this without even including the iSecure product, which was launched at the end of the quarter.

However, Napco’s ambitions don’t stop there. The goal is for recurring revenues to reach 50% of revenues within five years, which will have a pretty dramatic impact on margins (see below).

How will the company get there? Well, of its three divisions, only one (the alarm division) is selling products which generate recurring revenues, but Napco is expanding offerings to all three divisions.

In order to stay ahead of the competition and generate more recurring revenues, Napco keeps on introducing new products, like, for instance, the iSecure, a $99 dual-path alarm and smart home system that works over cellular networks, generates recurring revenues and can be addressed with an app (see here for a description).

It was introduced in April but only started selling at the end of the quarter, so it didn’t add to Q2 results. iSecure won the most valuable product award at the Home Controls category at the ISC West Trade Show in 2019.

And iSecure could be off to a promising start as (from the Q2CC):

we have one competitor who has pulled out of the residential intrusion part of the business, because they weren’t getting any recurring revenue and recurring revenues is the name of the game. They pulled out of a segment of the market, which is a great opportunity for us, especially with us coming out with iSecure

And on the other divisions, i.e., access control and locking (Q2CC, our emphasis):

It will require educating end-customers of the benefits, as recurring fees are no part of the present setup in these markets, but management is optimistic, as these offer a host of new functionality. 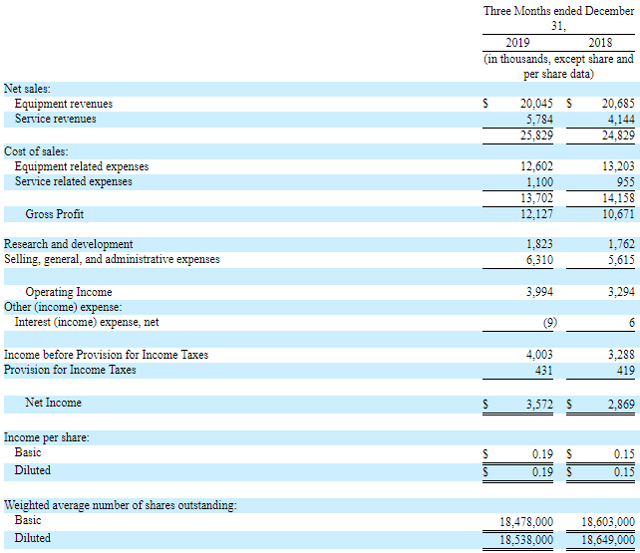 The $25.8 million in revenue was $1.21 million light, but there was a penny beat in earnings per share, and it’s notable that with just 4% revenue growth, the company increased net income and adjusted EBITDA at 25% and 24% respectively.

Here is how the different divisions generated revenue (from the 10-Q):

There is a positive trend upwards in margin. In Q2, gross margin set a new record on a strong product mix (producing 37% in hardware revenues).

Gross margins would have been even higher if the mishap at the biggest distributor hadn’t happened, as Napco couldn’t benefit from leverage from its Dominican Republic plant, which needs hardware sales above $20 million to kick in.

Operating margin is also increasing, with operating income increasing 21% to $4 million in Q2 and rising 50% to $7.6 million in H1 2020. There is significant leverage at work here.

The company is now running at a 17% EBITDA margin:

But management sees this at 25% by the end of next fiscal year (in six quarters) based on the continued disproportional increase in recurring revenues.

Five years down the road, management aims for recurring revenues generating half of the company’s sales, leading to a rise in EBITDA margin at 30-40%.

The company is debt-free and has $11.8 million in cash and equivalents. Stock-based compensation and dilution really are no worries:

There are 1.36 million of performance pay options awarded. Senior management owns 38% of the company – they don’t need to be incentivized any more.

Valuation multiples have been riding the wave of increasing recurring revenues and the associated margin increases, but the bad Q2 print has brutally interrupted that process.

Analyst expect EPS of $0.83 this year, rising to $1.21 next year. The shares aren’t overly expensive, in our view.

If the Q2 hardware print is a one-off, as we think it is, the really significant selloff in the shares (from around $30 to the low $20s) offers a very good opportunity to establish a position.

The company keeps on innovating, the opportunity in schools and other public buildings seems significant, and recurring revenues keep on rising at a fast clip, leading to lots of leverage. What’s not to like?

Disclosure: I/we have no positions in any stocks mentioned, but may initiate a long position in NSSC over the next 72 hours. I wrote this article myself, and it expresses my own opinions. I am not receiving compensation for it (other than from Seeking Alpha). I have no business relationship with any company whose stock is mentioned in this article.