Rosneft (OTCPK:RNFTF) starts to look promising with its steady operational performance, though caveats here are sanctions and relatively high debt load. The company actively addresses both issues, so we may see attractive dividend yields of around 9% starting next year. For now, Rosneft, as well as other O&G companies, is devoured by the coronavirus panic which has led to a striking decline in oil prices. If you’re looking for an attractive entry point to buy the stock, I’d recommend waiting for more clarity in the oil market as demand and supply will have to find a new equilibrium in the medium term.

In Q4 2019, the company’s revenues from own projects and joint ventures amounted to 2,22 trillion roubles. The decrease in ruble equivalent revenues (-0.7% Q-o-Q; +2.7% Y-o-Y) was caused by the negative impact of the price on oil products as a result of waiting for the introduction of new IMO requirements and a decrease in the oil price (-1.0% in ruble terms) as compared to Q3 2019.

In Q4 2019, EBITDA was 488 billion roubles, down 11.9% in ruble terms compared to Q3 2019 (0% Y-o-Y). The decrease was mainly due to the negative trend of oil and high-sulfur fuel oil prices in anticipation of the entry into force of restrictive IMO requirements, as well as lower production and sales volumes of oil products due to scheduled repairs. 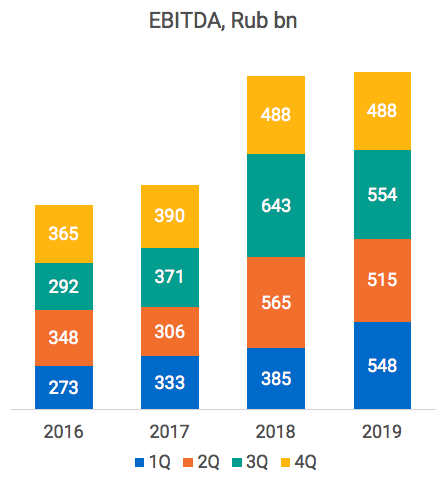 Net profit attributable to the company’s shareholders in the fourth quarter of 2019 was 158 billion roubles (-29.8% Q-o-Q; +45% Y-o-Y), including 19 billion roubles due to the effect of the reversal of some of the previous asset write-offs. 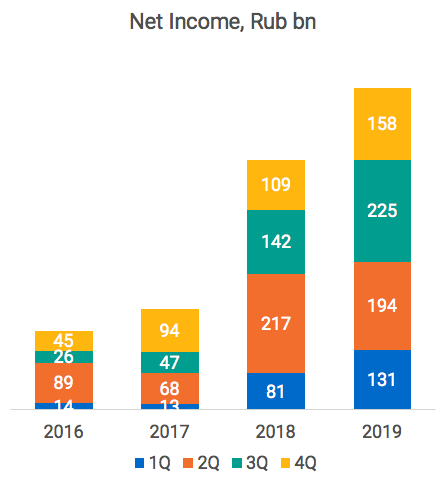 Net profit increased by 29% Y-o-Y in rouble terms for 2019 due to positive operating profit dynamics as well as lower costs. 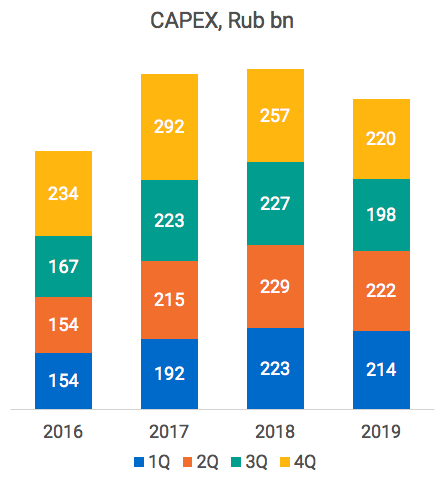 In annual terms, capital expenditures amounted to 854 billion roubles (-8.8% Y-o-Y), mainly due to the optimization of the company’s drilling program, as well as due to restrictions on launches of new projects, taking into account the extension of production limits under the OPEC+ agreement. 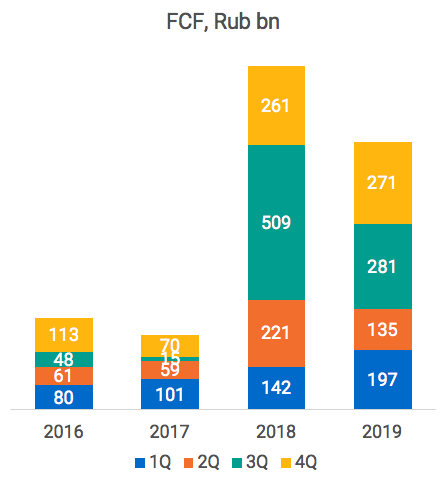 Net debt decreased by 174 billion roubles in 2019. The net debt/EBITDA multiple amounted to 1.4x in ruble terms, which is a relatively high number compared, for example, to almost debt-free Lukoil (OTCPK:LUKOY) and Tatneft (OTCPK:OAOFY).

Overall, despite the decline in oil prices and reduced production, the Q4 results were positive. The impact of negative factors was offset by increased oil sales volumes.

The US intends to continue building pressure on the regime of Venezuelan President Nicolas Maduro in the near future, said U.S. representative for Venezuela Elliott Abrams recently. The statement followed the imposition of sanctions against one of the subsidiaries of Rosneft – Rosneft Trading, which was involved in trade operations with Venezuelan oil.

“There will be more steps and more pressure in the coming weeks and months,” he said at a briefing in the State Department.

This sanctions case is interesting to be viewed in a broader context of the relations between the US and Venezuela. The thing is, for the US, control over Venezuela is crucial because Venezuelan oil is heavy and its composition is similar to that of shale oil. For a long time, Venezuela has been an “oil reservoir” of the USA on par with Canada. 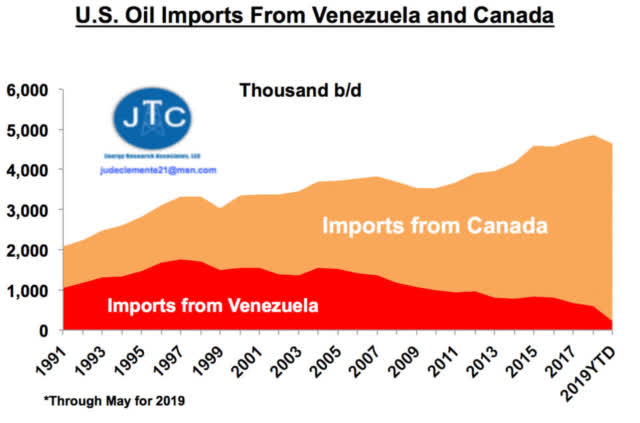 American companies didn’t develop oil refining and petrochemistry in Venezuela, and all the oil was sent to American refineries, which are technologically built for this oil.

Despite the reports on energy self-sufficiency, the US remains the largest crude oil importer. In this regard, granting access to Venezuelan oil could be pretty useful for the United States as it could act more aggressively both in Europe and the Middle East, particularly, with imposing more sanctions on Russia and Iran alongside conducting a trade war with the European Union. By breaking the Maduro regime and redirecting Venezuelan oil to its refineries, the US would be able to isolate itself from the potential instability in the oil market as a result of its actions in Europe and the Middle East.

Rosneft now will be involved in a cat-and-mouse game, where the US authorities put Rosneft’s subsidiaries under sanctions and Rosneft redirects affected operational activities to other subsidiaries. Sanctioning Rosneft itself seems to be a bit short-sighted step due to increased dependency of the US oil refining industry on Russian oil as there are not many countries that could replenish the supply of heavy crude oil.

To sum up, sanctions will definitely bring some inconvenience for Rosneft, but for now, it doesn’t look like something the company can’t mitigate. However, in the longer term, Rosneft will continue to suffer from the collateral damage in the form of sanctions caused by the strategic course of the US towards Venezuela.

Rosneft’s dividend policy assumes a half-yearly payment of 50% of IFRS net income. In the first half of 2019, Rosneft paid 162.5 billion rubles to shareholders in dividends. Taking into account profit for 2019, Rosneft may allocate 191.5 billion roubles to dividends for the second half of the year. In this case, the dividend yield to current prices for the second dividend payment will amount to ~4% or 18 rubles per share.

Due to higher production rates, Rosneft retains the potential for revenue growth better than the oil and gas industry as a whole. However, the high debt burden and capex-intensive projects won’t allow the company to increase its dividend payout ratio to more than 50% of its net profit anytime soon.

In the end, I’d like to share my opinion on the company’s next big project – Vostok Oil. I still can’t find a reasonable answer to the question of why one of the biggest oil companies in the world asks for massive tax concessions for a project which is pitched as one of the most attractive for the company and the country as a whole due to its positive economic effect. We could say that, for example, Novatek successfully developed Yamal LNG with the help of the government, but:

The situation around shale oil producers clearly shows that even though it may take a decade to prove how financially unsustainable shale oil production actually is, fundamentally unprofitable projects remain unprofitable no matter how much support you ask from the government or banks. This point is relevant for traditional oil producers too, therefore, I stay cautious about such a megaproject as Vostok Oil.