Alphabet (GOOG) (GOOGL) stock has gained over 30% in the past year, but the company delivered lower-than-expected revenue last quarter, which raises an important question for investors. Should you take profits now that the stock is still close to historical highs and revenue missed expectations last quarter?

Revisiting the investment thesis makes sense after a quarter with lower-than-expected numbers. Nevertheless, a deeper look at the business shows that the long-term fundamentals remain intact, and any weakness in the stock price should be considered a buying opportunity.

Alphabet is deeply focused on long-term value creation, and financial performance tends to be hard to predict on a quarter-to-quarter basis. Revenue came in below Wall Street expectations last quarter, the company reported $46.075 billion in sales versus $46.94 billion estimated by Wall Street. Still, most companies in the world can only envy the 19% increase in constant currency revenue that Alphabet delivered.

Most of the weakness during the quarter was concentrated on Google Other due to declining hardware sales during the period. Hardware is inherently more volatile and cyclical than other areas, and it is a relatively small business for Alphabet, so this does not look like much of a problem for the company going forward.

Importantly, management disclosed revenue statistics for the YouTube and cloud segments for the first time in the most recent earnings report, and these areas are showing compelling potential.

During the full year 2019, YouTube Ads produced $15.149 billion in sales, growing by 36% versus 2018. YouTube has over 20 million music and premium paid subscribers and over 2 million YouTube TV paid subscribers, ending 2019 at a $3 billion annual run rate in YouTube subscriptions and other non-advertising revenues.

Alphabet is currently incorporating shopping into YouTube, allowing customers to easily buy products in YouTube’s home feed and search results. This could open the door to exciting possibilities in the years ahead.

Google Cloud ended 2019 at a more than $10 billion run rate, up 53% year-on-year. Not only is Google Cloud growing at full speed, but the growth rate is even accelerating versus prior year. Year on year, the number of deals over $50 million more than doubled in 2019.

During the full year 2019, Alphabet retained 20% of revenue as operating margin and the company produced over $54.5 billion in cash flow from operations. In terms of both profitability and cash flow generation, financial performance is still rock-solid.

Under the leadership of Pichai, Alphabet is offering more financial disclosures and shareholder-friendly policies, and providing data for YouTube and cloud is a nice step in that direction. If this trend continues, it could provide more visibility to investors in Alphabet, and more visibility tends to have a positive effect on a stock’s valuation.

Valuation is an art as much as a science, and the true value of the business depends on the earnings that the company is going to generate in the future, not on the earnings that it has produced in the past. Unfortunately, future earnings cannot be predicted with certainty, only estimated. That said, we can have a pretty clear idea about what the possibilities are based on different kinds of forward-looking estimates for Alphabet.

For 2021, the forward P/E ratio ranges from 25.6 to 18.1, with the average standing at 22.6. This is hardly excessive when considering that Alphabet is a highly profitable business with exceptional opportunities for growth in the long term.

Valuation should be interpreted in its due context. A company that generates strong profitability and revenue growth obviously deserves a higher P/E ratio than a company that is losing money or facing declining revenue.

However, it can be challenging to incorporate multiple factors into the analysis and quantify them in order to see the complete picture. In that spirit, the PowerFactors system is a quantitative system that ranks companies in a particular universe according to a combination of factors: financial quality, valuation, fundamental momentum, and relative strength. 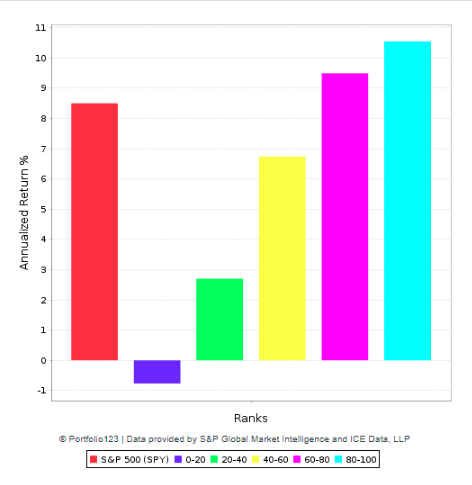 Data from S&P Global via Portfolio123

The backtested performance numbers show that companies with high PowerFactors rankings tend to deliver superior returns over the long term, and the higher the ranking the higher the expected returns.

Alphabet has a PowerFactors ranking above 99.5 as of the time of this writing. This means that the stock is in the top 0.5% of companies in the US stock markets, based on financial quality, valuation, fundamental momentum and relative strength together.

It is important to keep in mind that an algorithm such as PowerFactors is based on current data and current expectations about future data. This provides a valuable assessment based on numbers as opposed to subjectivities, but it also carries some limitations.

The returns from a stock will depend on the cash flows that the business can produce in the future. The algorithm is saying that Alphabet stock is attractively priced on past history and current expectations about the future. But the company needs to continue delivering in accordance with expectations in order for the analysis to be valid on a forward-looking basis.

Backtested data for quantitative algorithms should always be taken with caution. The backtest shows that a large number of companies with high PowerFactors rankings tend to deliver superior returns over the long term, but this does not tell us much about how Alphabet stock, in particular, will perform in 2020.

In other words, it is good to know that the numbers are bullish for Alphabet when considering multiple return drivers together. However, investors should always assess the business behind the numbers in order to analyze if those numbers are sustainable or not going forward.

Regulatory risk is a major risk factor weighing on the stock, and the investigation from the Justice Department has created a shadow of uncertainty around Alphabet. However, it seems like the market is overestimating the potential impact of this factor.

Google has been facing increasing competition from players such as Facebook (FB), Amazon (AMZN), Twitter (TWTR), Pinterest (PINS) and Snapchat (SNAP) in recent years, so it’s hard to say that the company is a monopoly. Both consumers and advertisers have plenty of options to choose from, and they are literally one click away from one platform to the other.

Interestingly, Google had a major victory in this area in 2013, when the Federal Trade Commission declared, after an investigation of nearly two years, that the company had not violated antitrust or anticompetition statutes in the way it arranges search results.

The most likely scenario is that regulations will be focused on areas such as data privacy and competitive behavior. Even if these regulations could have an effect on market sentiment towards the company, chances are that Google will remain a dominant player in its key markets and a massively profitable business in the years ahead.

Competition from Amazon and Facebook is a more relevant factor to watch in my opinion, because both companies are top players in their segments with plenty of financial and strategic resources.

The opportunities for growth in online advertising should provide abundant room for Alphabet, Amazon, Facebook, and others to do well in the long term. Besides, Alphabet comes second to none in terms of competitive advantages in its main markets. However, investors should always keep an eye on the competitive landscape when investing in companies operating in a dynamic industry prone to competitive disruption.

But the point is that those risk factors are already well-known by the market and incorporated into the stock price. Looking at the big picture, Alphabet is a world-class business with exceptional competitive strengths and generating rock-solid financial performance. At current prices, the stock is very reasonably priced, if not downright undervalued.

Alphabet is a position in both my own portfolio and The Data Driven Portfolio since I replicate such a portfolio with my personal money. The long term bullish case for Alphabet looks as strong as ever right now, so I am planning to hold on to Alphabet stock over the long term. As long as the fundamentals remain strong, any material weakness in the stock price should be considered a buying opportunity.

A subscription to The Data Driven Investor provides you with solid strategies to analyze the market environment, control portfolio risk, and select the best stocks and ETFs based on hard data. Our portfolios have outperformed the market by a considerable margin over time, and The Data Driven Investor has an average rating of 4.9 stars out of 5. Click here to get your free trial now, you have nothing to lose and a lot to win! 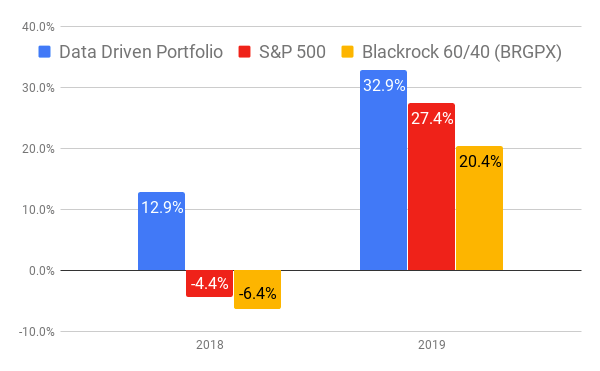 Disclosure: I am/we are long GOOG, AMZN, FB. I wrote this article myself, and it expresses my own opinions. I am not receiving compensation for it (other than from Seeking Alpha). I have no business relationship with any company whose stock is mentioned in this article.

US DOLLAR OUTLOOK: AUD/USD ASCENDS AHEAD OF FOMC STATEMENT DUE US Dollar weakened across the board of major currency pairs during Tuesday’s trading session AUD/USD price action was a top performer and likely benefited from […]

Yep and I’ve been watching the price action of Gamestop (GME) during the US session. Monday, GME opened up 36% at $97. I watched it go to $160 before falling back down to close at […]