Nemetschek (OTC: NEMTF, ETR: NEM) is scheduled to release its full Q4 financial figures in early February (the exact date is unknown). We expect to see a slowdown in the growth trajectory following strong 9M performance, coupled with rising profitability amid lower growth investments. The full set of figures, as well as new financial targets, will be published on March 31, which we believe would stay in a similar range as in the past years. We highlight that Nemetschek is facing some tough comparables this year, given that price increases and an extra boost from the trade fair won’t continue.

Q4 sales should pick up by “only” 12.6% organically – below group’s guidance as growth in the Build segment subsides

We expect to see a solid set of results, with sales growing at 12.6% organically, or 15.5%, including M&A reaching €151 million and reaching only the lower end of the guidance (organic growth guidance between 13% and 15%). Compared to the first 9M ’19, where Nemetschek has been able to beat its guidance each quarter (see chart below), Q4 should show some moderate slowdown as customers become saturated and the past price increases in the Build segment (key performance driver) are not sustainable, as indicated by the company on several occasions (conference call transcripts are not available).

Overall, 2019 should be one of the strongest years with organic sales growth of 15.8% or 20.5% all-in as Nemetschek benefited from the trade fair at the beginning of the year as well as quarterly price increases in the Build segment and continued customer switch from 2D into 3D construction models as BIM regulation in the European market becomes mandatory this year. Consensus figures also indicate all-in growth of 20.7% – ahead of consensus (17-19%) and in line with our estimates.

Going forward, we appear to be a bit more optimistic in terms of growth dynamics and expect the top line to pick up by 17.5% (all in) versus 15.3% market consensus for 2020.

Chart 1: Q4 top line growth is set to slow down

Solid growth in the design segment is set to continue

The design segment contributes c. 57% to the total revenue and can be viewed as a highly penetrated and mature segment in the Nemetschek’s product portfolio. In Q4, we expect to see sales to slide back to high-single digit growth of 9.2% as the market and customers become more saturated, making it difficult for the company to sustain double-digit growth going forward.

Overall, 2019 was a very favorable year for the Design segment (+10.7% y/y), and the first revenue boost came from the BAU 2019 trade fair (lifting Q1 revenue by an estimated 2-3%) as well as continued switch to 3D/BIM from 2D building models as Building Information Modelling (“BIM”) becomes mandatory (for public projects) starting 2020 and internationalization efforts (e.g., bringing European brands to the US).

Visible slowdown in the Build segment is expected

Build segment, the second-largest segment, which accounts for roughly 30% of total sales, should see its growth dynamics starting to fade. We expect to see a visible growth slowdown: starting the year with 33.5% growth (Q1 ’19) and finishing it with an 18.6% growth in Q4. This growth development should come as no surprise, as Nemetschek has been very vocal that its price increases are not sustainable in its high-flyer Bluebeam software. This was also indicated in its mid-term growth guidance of 18-20%, down from 25-30%.

Overall, Nemetschek should close the year with 25% growth and reaching the lower end of its guidance (see above), supported by 1) prices increases (c. 10% every quarter: Q1-Q3) and 2) increased penetration of big/OEM customers are largely penetrated. Going forward, we would expect the company starts targeting SMEs with smaller contract/license volume and accelerating the switch to SaaS and its temporary negative impact on growth (we believe around 90% of Build revenue is license-based).

Chart 3: Build remains the fastest-growing segment in the portfolio (but not for long)

The manage segment, which is the second-smallest segment with c. 7% revenue contribution, has been considerably expanded by the two recent acquisitions: 1) MSC Solutions (acquired in Q3 18) and 2) Axxerion (brand-level acquisition in Q1 19), which both run under the (umbrella) brand name Spacewell.

In Q4, we see sales picking up by an estimated 72%. Adjusting for Spacewell, organic growth should stand at 16%, largely supported by the regional expansion (mainly in Europe) and cross-selling into a new customer base.

Overall, 2019 was a year of further expansion of the product portfolio and integration, which, according to the company (Q1-Q3 conference calls), is on track, albeit at a bit slower pace as expected, with sales picking up organically by 15% or 173% all-in. In recent years, Nemetschek started to recognize growth slowdown in its core segments (Design and Build), which together account for more than 80% of total revenue. In order to circumvent this slowdown, it started to actively expand its Manage portfolio, as this market is rather underserved and represents 90% of the building’s lifecycle (according to Nemetschek). In fact, the company expects to become the second Build segment in the mid-term with similar growth rates. 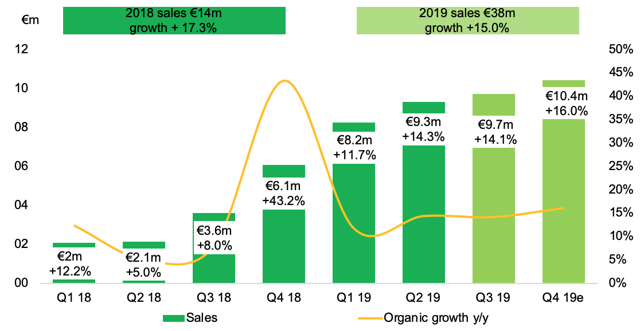 The media & entertainment segment (“M&E”) currently accounts for only 6% of the group’s sales and was always viewed as a non-core for Nemetschek. However, with the recent acquisition of Red Giant – the largest in this segment – the company reshuffles its revenue mix lifting M&E share to more than 10%, while simultaneously boosting its subscription share as Red Giant is a SaaS-provider – in line with the group’s strategy for this segment (i.e., starting August 2019, Nemetschek entirely switched this segment to SaaS).

We expect to see solid revenue growth in Q4 with sales up 22.4%, including the Redshift acquisition, which should contribute around €1 million in sales. Stripping that out, organic sales growth should be at 7.5% – a visible decline compared to the first 9M ’19 of c. 16.4%, which is driven by the switch to SaaS. This dynamic is also comparable for the full 2019, with expected top line growth of 22.4% all-in or organically at 7%. 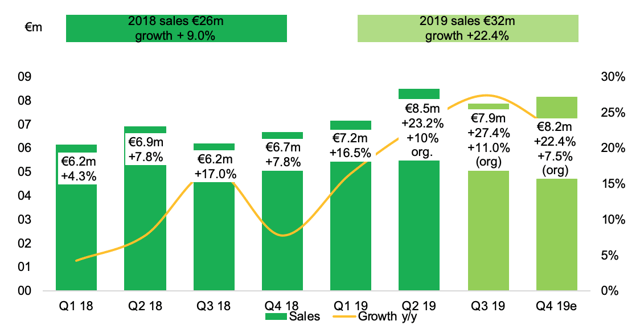 Profitability improvement – on a sequential and annual basis

We see adj. EBITDA (excl. IFRS) picking up to €42 million, or 28% y/y, corresponding to a 28.1% margin – +270bps above Q4 ’18 and guidance (25-27%), mainly explained by lower investments and as the margin-dilutive impact of acquired businesses last year began to subside. This margin development also in line with the group’s statement, that a slowdown in top line growth should also generate higher margins.

For the full 2019, we see adj. EBITDA should be up 24.2% y/y well ahead of top line growth of 20.6%, translating into 27.1% margin – the higher end of the guidance. We are also on the same level as the market and don’t expect any sizable volatility in the reported figures. Going forward, we on par with the market, as we expect a slowdown in top line growth should boost the group’s profitability.

We expect to see a solid set of results with double-digit top and bottom-line growth rates. However, organic sales growth should start to subside as it gets increasingly difficult to drive price increases and upsell into the existing customer base, in particular in North America. In 2020, we still expect to see low-double digit top line growth with a low chance of outperformance as markets become more saturated. In the mid-term, we would expect to see a higher contribution from the currently under-represented segments such as Manage and Media & Entertainment as recent M&As start to generate synergies. For the time being, considering the extremely high valuation levels (P/E 65x, EV/EBITDA 42x), we would adopt a neutral stance, as we see more downside than upside in the short term.