Midstream gains kept rolling for a sixth straight week, again riding a strong broad equity market higher, and defying weakness in upstream energy stocks (XOP -3.6%). The inclusion of $50bn of energy purchases by China over several years as part of the Phase One trade agreement signed this week was notable and a positive for export-oriented midstream stocks.

Oil prices drifted lower this week, and Wednesday’s inventory report of a large refined products build wasn’t helpful. Cold weather returned to the East Coast this week, but natural gas prices were hammered to their lowest point in 4 years on an increasingly bleak global oversupply situation. Midstream conference season is over, 4Q results and 2020 guidance season begin this week, after one more long weekend.

In strength training, there is a concept of trying to figure out how long you can keep doing the same training stimulus before you peak and need to change something up. This is referred to as your “time to peak,” according to popular online resource Reactive Training Systems.

The concept got me thinking about what has become an annual MLP bounce off a tax-loss selling bottom late in the year, and how long it usually lasts. After reviewing the data, the time to peak for the Alerian MLP Index is around 6 weeks and around 15-20%. The current rally stands at 45 days and almost 15%. The chart reviews the rallies that began in December and ended in January or February in each of the last 5 years. 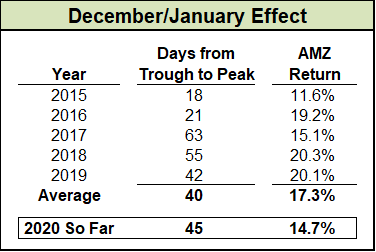 This year could be different, the one that breaks free of the recent cycle, but if not, we are approaching the typical point of inflection.

Within midstream this week, there were two more reminders (not that we needed more!) of the deficient corporate governance embedded within the MLP structure. First, small convenience store and gas station MLP CrossAmerica Partners (NYSE:CAPL) bought out its general partner for a price that was more than 75x current IDR cash flow. Second, ENLC cut its dividend for the 4th time in 12 years under the same chief executive.

“Give Me Another Ball”

Although the stock reaction was positive and the focus on positive free cash flow welcomed, the ENLC dividend “reset” was widely viewed as a missed opportunity to take a more conservative tact around payout ratio and a more aggressive approach to reducing leverage (as captured by Bloomberg columnist Liam Denning). ENLC seems content to hold leverage flat in order to help reduce leverage of its sponsor, opting to try to grow its way out of its leverage situation, a strategy that continues to fall short.

Repeated mis-steps and mis-alignment of interests that the partnership structure affords is what has institutional investors allocating away from the group. Limited partners have little ability to effect changes in management teams, and the general partner can do what’s best to make sure the sponsor de-levers itself ahead of the partnership.

Below is a list of the midstream MLPs with the most outright distribution cuts. ENLC is the active leader at this point, but there are some TRGP shareholders who probably started out as APL unitholders originally, who may have experienced more cuts.

I know management at ENLC is pretty into golf, so thought a golf movie analogy was appropriate. The ENLC situation is like the climax in the film Tin Cup. In that film, Kevin Costner’s Roy “Tin Cup” McAvoy has a chance to win the U.S. Open if he lays up and plays it safe. Instead, Roy “goes for it” and ends up hitting it into the water hazard. Then he takes several more attempts from that same spot with the same aggressive shot. 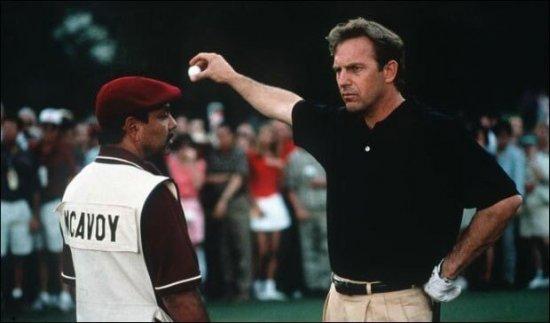 Despite several attempts at using growth to offset declines and creeping leverage, ENLC’s same leadership remains intact and appears to be gearing up for another run at it. Rather than take a drop and maybe win, they want to go for it… again. 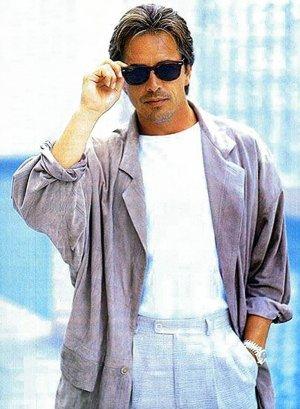 CAPL’s IDR elimination, acquisition and guidance combination announcement helped it outperform this week, after it was in the bottom 5 last week. EQM rebounded after poor performance last week to finish near the top this week, perhaps in sympathy with ENLC as EQM similarly has been pressured to cut its distribution. 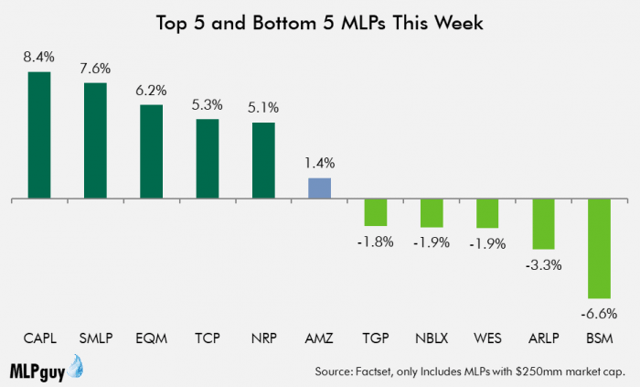 After just a few weeks, the YTD leaderboard already has multiple MLPs with more than 10% returns YTD. None of them have announced any material news, but NS, SHLX and HEP tend to benefit from fund flows into MLP products that disproportionately flow into their stocks. The bottom 5 YTD is almost exclusively names not eligible for the traditional midstream MLP indexes. 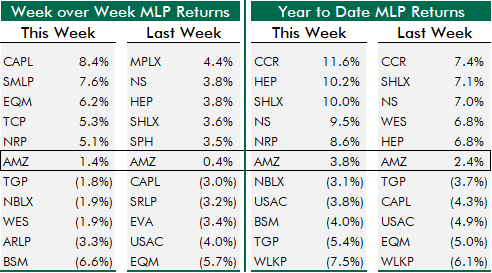 In the midstream corporation group, ENLC traded well after its distribution cut and guidance announcement. ETRN bounced despite weaker natural gas prices. Cheniere (NYSEMKT:LNG) benefitted from the signing of the Phase One trade deal on Wednesday. 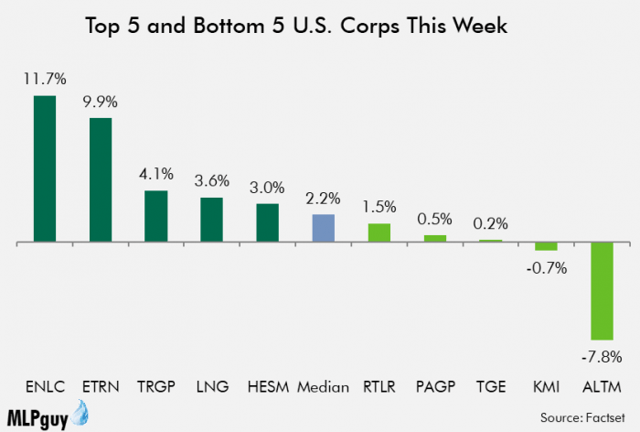 On the YTD leaderboard, HESM is out front, but Cheniere is well ahead of the other true corporations. The median return of this corporation group has lagged broader midstream overall as the seasonal MLP mean reversion trade continues to work, for now. On the downside, ALTM returned to its familiar spot at the bottom of the group. 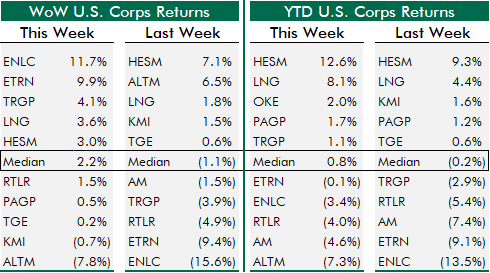 Among the Canadian names, TRP was the winner this week, but all the stocks traded up. There was positive news of a court win for the TransMountain Expansion project vs. the BC Government, which helped Canadian energy sentiment Friday. 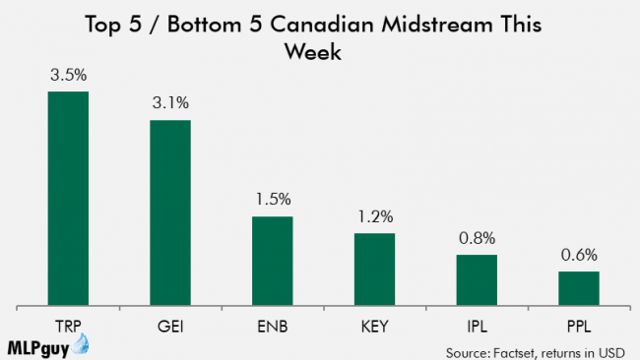 On the YTD leaderboard, Gibson climbed a few spots and TRP bounced out of the bottom spot. Pembina still leads the group for the year after lagging for most of last year.

News of the (Midstream) World

Another IDR elimination at a very high multiple this week, but it was a small MLP, so it was received positively. Beyond that, most of the news was in the distribution announcement section. 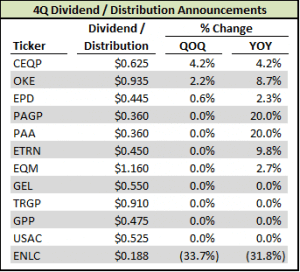 © Reuters. FILE PHOTO: Gilead Sciences Inc pharmaceutical company is seen after they announced a Phase 3 Trial of the investigational antiviral drug Remdesivir in patients with severe coronavirus disease (COVID-19), during the outbreak of […]