We have long held the view that gold’s fortunes were inversely linked to the US Dollar, as the Dollar strengthened, gold weakened and so on. Today, we will take a quick look at that relationship to ascertain if that premise still holds true.

The following is a chart of gold’s progress spanning a period of 18 months which shows the value of gold rising from around the $1,200.00/Oz level to the $1,600.00/Oz. A couple of corrections have taken place along the way which always causes indigestion in the precious metals space as the well-known ‘Wall of Worry’ had to be climbed.

Last year ended well with gold rallying through December; however, at the start of this year, gold looked sluggish and seemed unable to gain any real traction. Although, it should be noted that over the last few days, gold has taken a peek above the $1,600.00/Oz level.

The US Dollar Chart

The following chart depicts the oscillations of the US Dollar over last 18 months where the ‘97’ level acted as both a resistance level and a support level. However, the Dollar has managed to rise from around the 95 level to today’s highs of 99 with a possible breach of the 100 level in the near term. 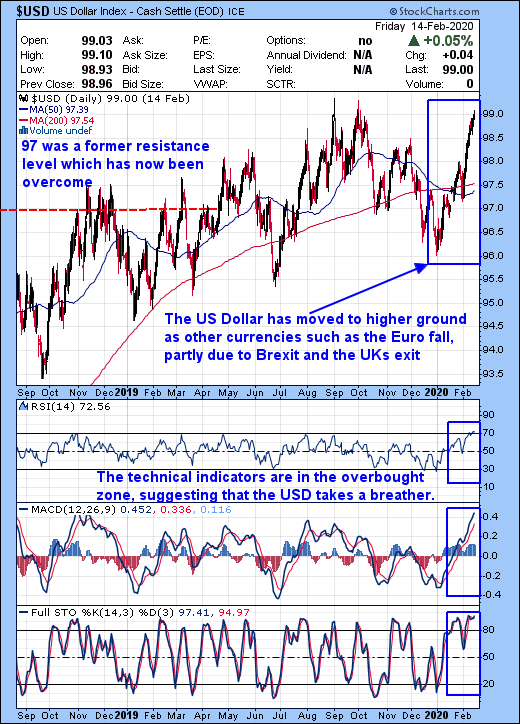 The technical indicators such as the STO, MACD and RSI are firmly in the overbought zone, suggesting that there might be a pullback in the near term. This of course is not a given as the other major currencies, such as the Euro have fallen dramatically of late, partly due to the UK’s exit from the European Union which renders the future of both parties uncertain.

This chart clearly shows that gold is making good progress despite the US Dollar also doing very well. It suggests that the inverse relationship that previously existed between them may be decoupling.

Gold has had an inverse relationship with the US Dollar and tended to move in the opposite direction to the Dollar. However, we can see from the chart above that gold is moving to higher ground despite the strength of the Dollar

A lot depends on the central bankers and their application of monetary policy. The ‘normalization’ of interest rates as a target for the Federal Reserve is now history as a more accommodative stance has been taken with the implementation of rate cuts.

There are signs that the global economy is slowing down so we wouldn’t be surprised to see the US reduce rates to zero before this year ends.

We should also note that Denmark now has negative interest rates applied to mortgages. If negative rates become the norm and it costs money to hold currencies, then we would expect investors to reallocate their funds to some form of hard asset such as gold.

In conclusion, I believe that gold has decoupled from the US Dollar and is moving under its own steam where supply and demand will play a more important role in the pricing of gold.

Gold has a bright future so the acquisition of both the physical metal and their associated stocks will prove to be profitable for those who act now.

You must have a comment so please add it to the commentary as the more diverse comments we get, the better informed we all become making our trading decisions more profitable.

If you are not already a Follower and wish to see our posts on gold, silver and the associated stocks, then please hit the follow button in order not to miss out.

Additional disclosure: Disclaimer: gold-prices.biz makes no guarantee or warranty on the accuracy or completeness of the data provided. Nothing contained herein is intended or shall be deemed to be investment advice, implied or otherwise. This letter represents our views and replicates trades that we are making but nothing more than that. Always consult your registered adviser to assist you with your investments. We accept no liability for any loss arising from the use of the data contained on this letter. Options contain a high level of risk that may result in the loss of part or all invested capital and therefore are suitable for experienced and professional investors and traders only. Past performance is neither a guide nor guarantee of future success.