As you know, once in a while, Splendid Exchange looks at seven major currency pairs in search of the evidence of popular delusions and the madness of crowds. The idea is to find anomalies and bullish or bearish divergences that will break the trend, not prolong it. It is a painful exercise, but also highly rewarding.

Before revealing the results, let me first say a few words about the current global market environment. This is important because global macro conditions cannot be numerically measured and cannot be directly factored into econometrical models. They must be studied in qualitative terms. In my opinion, the most important themes impacting global foreign exchange market right now are the spread of coronavirus and growing fears of a global recession.

If the virus is brought under control (which seems possible given that the rate of increase in the number of new cases has slowed after a big jump, due to a change in methodology), then it is reasonable to assume that Chinese economy will resume operations later in February and get more or less back to “normal” from March onwards. However, some output – especially discretionary spending – will be lost forever. Still, most output “lost” in Q1 will be made up later as activity slowly gets back to normal, and that front-loading of macro stimulus measures will also support a recovery in growth.

The impact on other economies outside China will work through lower demand for their exports disruption to supply chains and less tourism.

If the virus takes longer to control, the weakness in global economic growth in Q1 could spread to Q2, and although there would still be a rebound beyond that, the net effects would be larger.

The economic shock due to the coronavirus probably means that the global monetary easing cycle is not over yet. Although the shock is likely to be temporary, it will have a significant near-term dampening effect on a global economy that was in a weak position to start with (see below).

The United Nations has warned that weaker growth in both advanced and developing countries means the possibility of a global recession in 2020 is a clear and present danger. In a flagship report, the UN’s trade and development body, UNCTAD, said that 2019 endured the weakest expansion in a decade and there was a risk of the slowdown turning into outright contraction next year.

While there is no consensus among the economists about the impending recession, there is certainly an agreement that growth in 2020 would be sluggish, at best. In addition, central banks’ attempts to normalize monetary policy are now endangered by persistently low inflation. 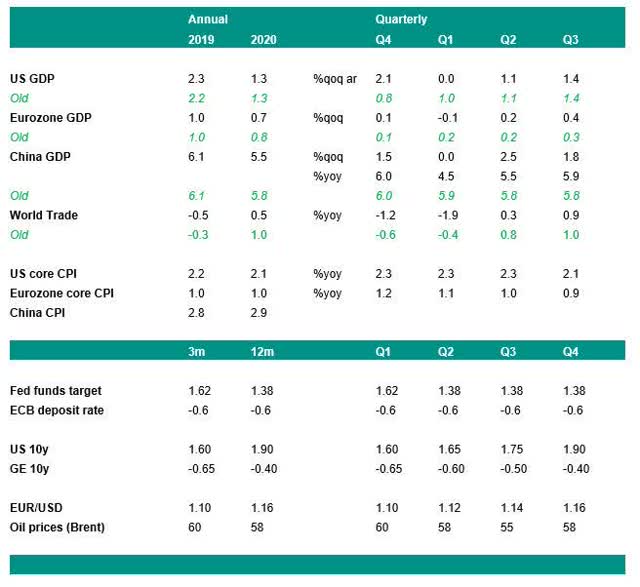 Forex traders should, therefore, be on high alert for competitive devaluations as countries across the globe take steps (either implicitly or explicitly) to depreciate the value of their currency in order to spur exports and boost the economy. In this regard, it becomes particularly important to monitor currencies’ relative value. This is exactly what my econometric studies attempt to achieve. Below are the latest results. 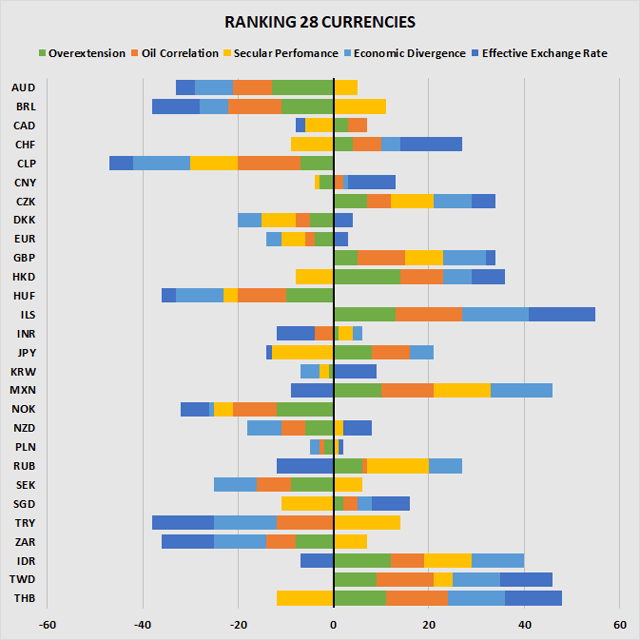 On balance, the Israeli New shekel, New Taiwan dollar and Mexican peso appear to be the most overrated currencies, with a net score of +55, +46 and +37, respectively (see the chart above). The Thai baht, Czech koruna, British pound and Indian rupee are not far behind, at +36, +34, +34 and +33 respectively. The most “underrated” or undervalued currencies are the Chilean peso (-47), Hungarian forint (-36) and Norwegian krone (-32).

What is important is that the relative overvaluation of the British pound is rather broad-based. In other words, the results are above zero for most econometric studies plus traders’ sentiment analysis. Conversely, the relative undervaluation of the Australian dollar is less extensive. For instance, secular performance analysis indicates that the currency is more or less fairly valued.

If you are a contrarian investor, you will want to short the most overvalued currency against the most undervalued currency. At this point in time, the most contrarian trade among the major currencies is to sell the British pound against the Australian dollar (or buy AUD/GBP). However, one needs to be careful here because technicals do not yet support the bullish case for AUD/GBP (see the chart below). The pair needs to close above 0.5200 to negate the bearish trend.

Over-extension analysis ranks the exchange rates in percentages of their respective trading ranges over the past years and allows us to see how far each currency has deviated from its historical (three-year) trading range. I choose to look at the three-year period for several reasons. First of all, it is long enough to capture more than half of a standard business cycle of most economies (according to the National Bureau of Economic Research, the average length of a business cycle is about 69 months, or a little less than six years). At the same time, a three-year range is short enough to be relevant and not to produce too smoothed-out results. In other words, analytical curves maintain some healthy volatility and tend to generate actionable trading signals. 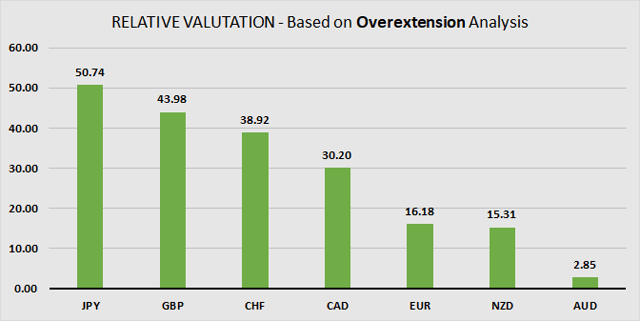 Oil correlation study simply examines the link between a country’s exchange rate and the price of oil. This relationship is quite critical because oil prices serve as an important proxy for future changes in the Consumer Price Index, which influences countries’ macroeconomic policies, which, in turn, affect the exchange rate. Based on the 12-month running oil price standard correlations, I have calculated that the Australian dollar is undervalued by 8.74%, while the British pound is overvalued by around 0.66%. 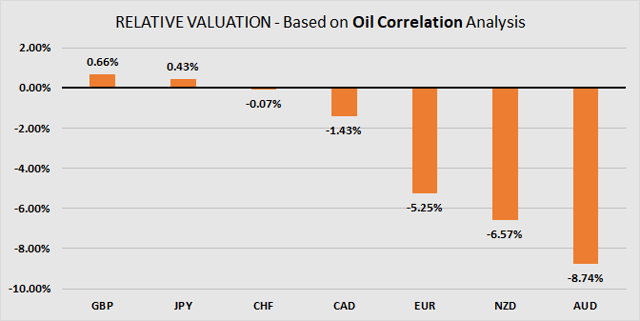 Assessing the strength of any given currency is quite tricky. Because we usually measure the performance of one currency against the other, the result is always biased. For example, a rising GBPUSD may not necessarily reflect improved fundamentals in the United Kingdom, but rather point to deteriorating fundamentals in the United States. A less-biased approach would be to compare a currency’s performance against some kind of neutral asset, such as gold. Analysts call it a secular performance analysis.

Secular performance is a useful, but underused, concept in forex trading. It is an important measure because gold (it is assumed) has some intrinsic value as opposed to fiat currency, which is just a “legal tender” not backed by any physical commodity. In the end, the price of gold will be determined by supply and demand rather than by central banks’ monetary policy and the printing press. Analyzing currency performance against that of gold allows us to see the scale of “real” demand for this or that currency.

Based on the 12-month running secular performance observations, I have calculated that the US dollar is currently undervalued by an average of 1.4% against seven majors. However, as of last Friday, it was most undervalued against the British pound (4.28%) and the Australian dollar (2.79%). In other words, GBP/USD is the most overvalued currency pair based on secular performance analysis. The Japanese yen is undervalued by 2.28%. 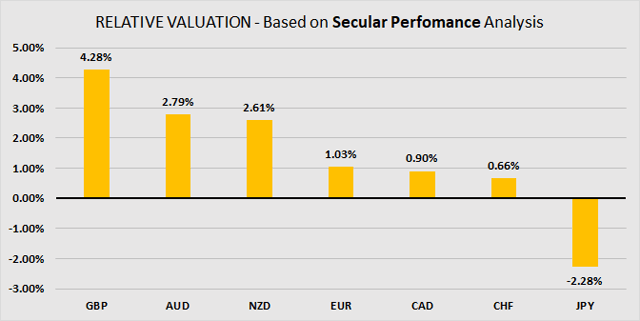 As a general rule, economic data should always justify the moves in currencies’ exchange rates. However, it is difficult (if not downright useless) to cherry-pick a single economic indicator and compare it to a currency’s performance, because the relative importance of any given economic indicator will vary depending on the economy in question. For example, trade balance data can influence the exchange rate of commodity exporters, such as Australia and New Zealand, but it is less relevant for the United States, whose dollar is a global “safe haven” (at least for now). In theory, GDP growth should act as an ultimate barometer of economic health, but GDP data is released too infrequently (usually on a quarterly basis) to be relevant in my analysis. Instead, I prefer to look at countries’ bond yields.

Two-year bond yields are considered to be an important measuring stick for market confidence and investor appetites. Most importantly, yields essentially reflect investors’ and traders’ expectations of central banks’ monetary policy, which is a major driver for the exchange rates. Therefore, the difference between two countries’ two-year bond yields should indicate which country is running a more expansionary monetary policy (which should be bearish for that country’s currency) and which country is in the contraction stage (which should be bullish for that country’s currency). Usually, the currency of the country with the higher bond yield appreciates against the currency of the country with the lower bond yield.

Based on the 12-month running two-year bond spreads correlations, I have calculated that the Australian dollar is the most undervalued currency among the majors (-6.20%), while the British pound is the most overvalued one (+1.16%). 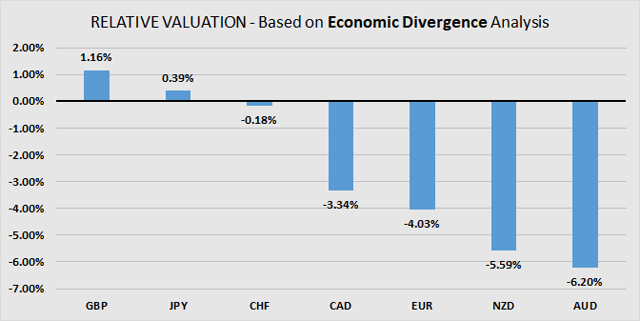 Effective exchange rate (EER) equals nominal exchange rate (calculated as geometric weighted averages of bilateral exchange rates) adjusted for relative consumer prices. The most recent weights are based on trade in the 2014-16 period, with 2010 as the indices’ base year.

As you can see from the chart below, the Swiss franc has appreciated the most among its peers, followed by the U.S. dollar, while the Australian dollar, the Canadian dollar and the Japanese yen are clearly lagging behind. Overall, the EER analysis does confirm the relative overvaluation of the Swiss franc (127.93) and the relative undervaluation of the Australian dollar (81.92) – see the charts below. 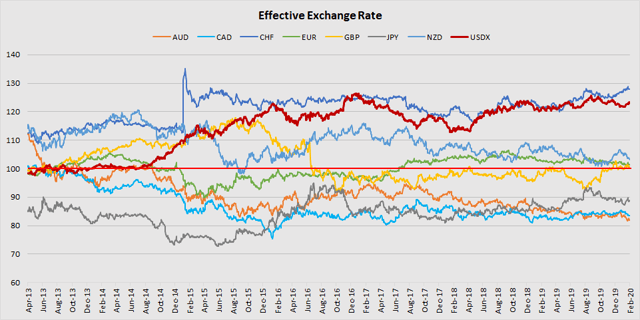 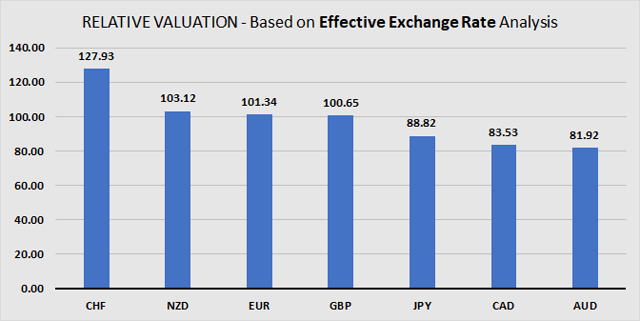 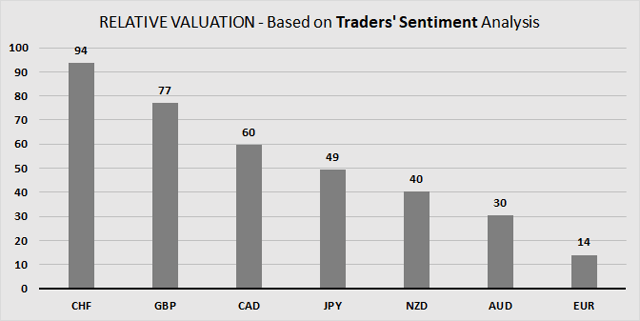 I see several trading opportunities based on the above results:

2. Long EUR/USD – Based on the fact that the short side of the trade in euro futures is extremely overcrowded and the pair is ripe for a corrective bounce. Target: 1.090. Stop loss: 1.082.