European major currencies such as the Euro and British Pound outperformed against the US Dollar on Friday. Generally, the haven-linked Greenback has been on a climb amid the outbreak of the coronavirus which is threatening global growth. The United States was thrown into the spotlight after a gauge of business activity unexpectedly contracted according to preliminary estimates for February. Wuhan virus woes were brought up.

Downside outlooks are slowly making their way into forecasts. For example, Apple announced this past week that they may miss near-term revenue targets as a result. The markets are now almost fully baking in two rate cuts from the Federal Reserve by the end of this year. Given the US Dollar’s relatively high yield advantage amongst the majors, signs that it could decline is a downside risk for USD in the immediate sense.

During the European session, cautiously upbeat Eurozone and UK PMIs also boosted EUR/USD and GBP/USD respectively. The anti-risk Japanese Yen aimed little higher as the S&P 500 and Dow Jones closed -1.05% and -0.78% to the downside respectively. It was revealed that the Fed’s balance sheet slightly contracted this past week and more of the same is a downside risk for general market mood.

With that in mind, Asia Pacific equities may follow the downbeat mood on Wall Street as the new week gets rolling. Japanese markets are offline for the Emperor’s Birthday which makes for slightly less-liquid conditions. While the USD could decline if markets continue betting on a more-dovish Fed, prolonged risk aversion may eventually offer upside boost to the currency given its status as the world’s reserve fiat unit.

EUR/USD turned higher following bullish signals from trader positioning – as expected. That has pushed the Euro above near-term falling resistance from the beginning of this month. A further upside close may shift the immediate outlook to bullish. However, the medium-term downtrend may be kept intact by falling resistance from the end of last year. A close under 1.0778 entails a resumption of the downtrend. 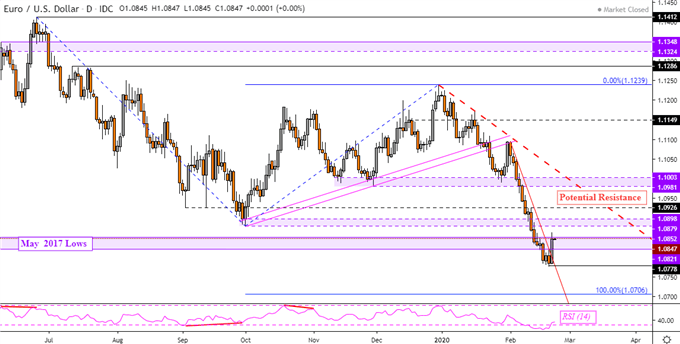