The large financial stocks remain some of the cheapest and least risky stocks to own in the stock market. Like any stock, Bank of America (BAC) isn’t perfect due to the disappointing negative leverage for the first time in years, but the investment thesis remains highly bullish due to the massive capital returns. Investors get substantial capital returns while waiting on the stock to rally.

For Q4, total revenues were down 1% to only $22.3 billion. Even worse, the non-interest expenses were up 1% to $13.2 billion. BoA has seen this expense line stuck in the low $13 billion range for the last year or so. Investors don’t have any reason to panic, but one should watch the expense line as 2020 develops. 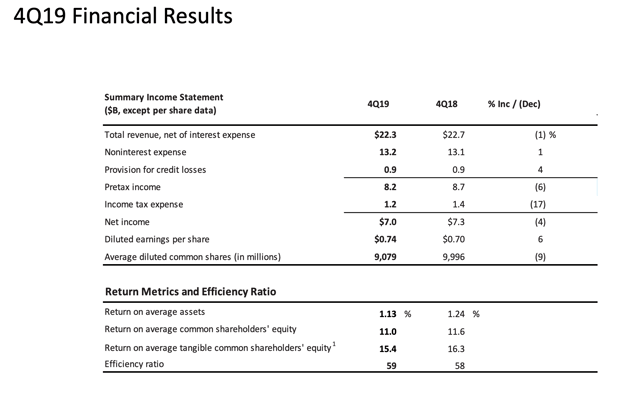 The end result was net income down from last year with EPS up due to the massive 9% reduction in the average diluted share count. Investors will need to watch wage and compensation growth as the bank is now committed to paying associates a $20 per hour minimum wage in the current quarter.

Higher spending on the customer facing employees could easily provide benefits to the bank via better customer service and more loyalty in the future. Any sustained cost pressure would hurt the stock long term.

In the quarter, the efficiency ratio was up YoY to 59%. Over the last few years, the bank had generated substantial efficiency improvements. Some spending is likely warranted following a decade of cutting costs following the financial crisis, but again, BoA should pull the efficiency ratio lower throughout the year or the bank is headed in the wrong direction here. 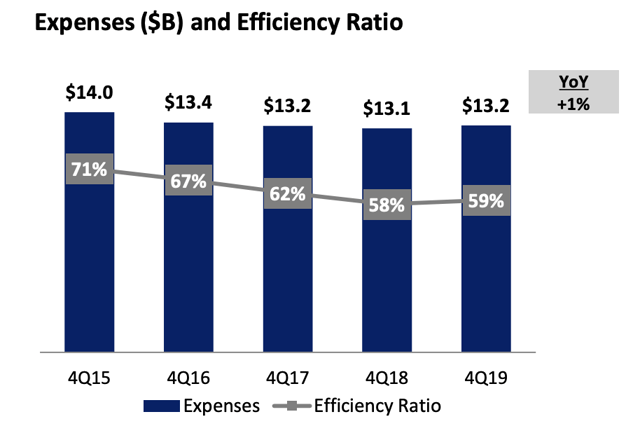 The bigger issue was the decreased NIM of 17bps, while the average rate paid on deposits only declined 15bps. The bank has grown assets, but the NIM has taken a massive hit this year due to lower interest rates causing net interest income to fall sequentially to $12.1 billion and decline $400 million from the last Q4.

The higher spending wouldn’t hit the bottom line, if not for the tough interest rate environment. Ultimately, without the sustained pressure on costs, BoA will see net income bounce solidly, and the diluted share count will continue to plunge, considering the stock trades at only 10x forward EPS estimates.

The incredible part about the value of BoA is the price to tangible book value in comparison to Wells Fargo (WFC). BoA and the troubled financial both trade at roughly the same 1.6x multiple of TBV. JPMorgan Chase (JPM) trades at a 50% premium to these two stocks at 2.3x TBV.

Due to their perpetually cheap valuation, BoA is able to deploy substantial capital to reward shareholders. The bank still offers a 2.2% dividend yield while spending the vast majority of capital returns on share buybacks. For 2019, the large bank spent over 80% of the $34.3 billion in capital returns on share buybacks. In the process, BoA reduced the diluted share count to 9.1 billion shares, down from 10.0 billion shares in Q4’18. 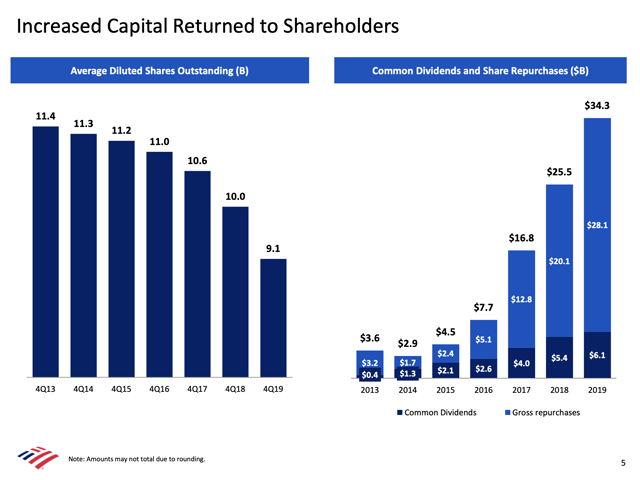 The company only spent $6.1 billion on dividends during the year. BoA could easily double the dividend spend to $12.2 billion for a 4.4% dividend yield and still repurchase over $20.0 billion worth of shares annually.

One needs to consider the large bank has a $30.0 billion annual share buybacks approved, so the share repurchases this year could rise even further. The share reduction should eclipse a 10% annual rate.

The loved JPMorgan only has a dividend yield of 2.7% while spending ~$11 billon on annual dividends with the $0.90 quarterly dividend. The large bank has a share buyback approval of $29.4 billion.

The doubling of the dividend would place BoA at a payout ratio closer to JPMorgan while leaving BoA with a similar projected yield to the struggling Wells Fargo at 4.3%. The valuation is clear when BoA still trades at multiples similar to the bank under regulatory scrutiny.

The key investor takeaway is that BoA remains a cheap stock priced by the market similar to the struggling Wells Fargo. The latter bank has a new CEO and ongoing regulatory restrictions warranting more investor concerns.

For now, investors are paid to wait on BoA with a strong dividend and the ongoing EPS boost from massive share buybacks. The bank can easily hike the dividend in a move that would boost the stock price.

Disclosure: I am/we are long C. I wrote this article myself, and it expresses my own opinions. I am not receiving compensation for it (other than from Seeking Alpha). I have no business relationship with any company whose stock is mentioned in this article.

Additional disclosure: The information contained herein is for informational purposes only. Nothing in this article should be taken as a solicitation to purchase or sell securities. Before buying or selling any stock you should do your own research and reach your own conclusion or consult a financial advisor. Investing includes risks, including loss of principal.