AUD/USD trades at its lowest level since 2009 as the coronavirus casts a weakening outlook for the Asia/Pacific region, and the exchange rate may continue to exhibit a bearish behavior as the Relative Strength Index (RSI) slips into oversold territory.

AUD/USD extends the decline from earlier this month as the Reserve Bank of Australia (RBA) warns that the coronavirus is “a new source of uncertainty for the global economy,” with the meeting minutes fueling bets for lower interest rates as “members reviewed the case for a further reduction in the cash rate.”

The Australian Dollar may face a more bearish fate ahead of the next RBA meeting on March 3 as the central bank shows a greater willingness to insulate the economy, and Governor Philip Lowe and Co. may reestablish its rate easing cycle over the coming months as “economic growth was expected to be weaker in the near term than had been forecast three months earlier.”

In turn the RBA may continue to endorse a dovish forward guidance as the board remains “prepared to ease monetary policy further if needed,” and AUD/USD may continue to give back the correction from the 2008 low (0.6006) as the Federal Reserve tames speculation for lower US interest rates. 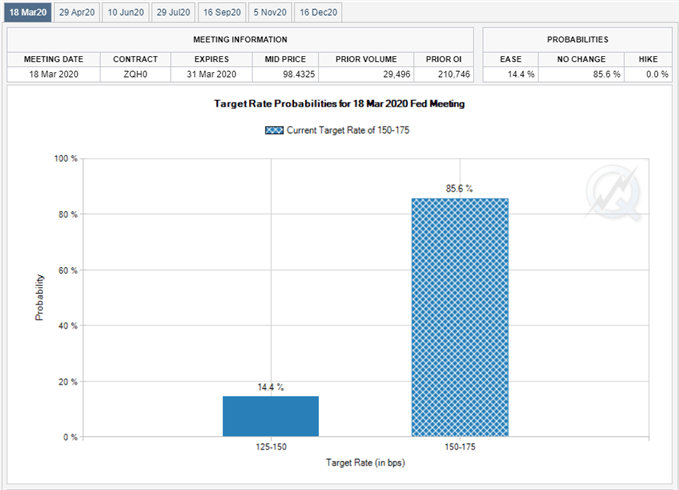 In fact, Fed Fund futures show a greater than 80% probability the Federal Open Market Committee (FOMC) will keep the benchmark interest rate in its current threshold of 1.50% to 1.75% on March 18, and speculation for a wider interest rate disparity between Australia and the US may keep AUD/USD under pressure as China, Australia’s largest trading partner, struggles to contain the coronavirus.

At the same time, recent developments in the Relative Strength Index (RSI) casts a bearish outlook for AUD/USD as the oscillator snaps the bullish formation from earlier this month and slips into oversold territory.