Amarin’s (NASDAQ:AMRN) Vascepa is taking aim at cardiovascular disease, which is the most destructive disease in the developed world. Not only does a large percentage of the world have heart disease, but it is one the fastest growing populations and the healthcare costs following suit. The world needs novel approaches to address this growing issue, and Vascepa could be an answer. Back in December, the FDA approved Vascepa as the first drug to have the indication for addressing patients with persistent cardiovascular risk beyond statin therapy, which is an extremely broad label that will allow providers to manage their patients’ cardiovascular ailments. As a result, the company is doubling their sales force to improve their already impressive commercial numbers and make Vascepa a blockbuster drug. Thus far, Vascepa has used by over 8M patients despite having a niche indication. The company has reported strong revenue growth and expects to report over $400M in revenues from 2019. Sadly, the ticker’s momentum stalled following the approval and has been stuck in a downtrend over the past couple of months.

I was a late arrival to AMRN, so I sold a large portion of my position upon approval and quickly employed some put options for insurance just in case the sellers really want to chop it down. However, I am stalking another buy once the share price decides to break its current downtrend. I expect the upcoming Q4/2019 earnings to be potential catalysts that could pop the trend and possibly start a reversal into the second half of 2020.

I intend to review the company’s plans to expand Vascepa’s reach and discuss some of the key catalysts remaining for AMRN in 2020. In addition, I take a look at the charts and discuss my strategy for developing a larger AMRN position in 2020.

As I mentioned in my opening, Vascepa has already been used by over 8M patients using one niche indication, but the company is ready to launch into an incredibly broad indication that has no direct competition. The company expects strong growth in the coming years as Vascepa becomes a brand name and multi-billion-dollar drug.

So far, Amarin has already showcased its commercial prowess and expects to report 2019 company revenue to come in just over $400M, which would be 85% growth from 2018 (Figure 1).

Now, the company is looking to deploy their ~$600M cash position to help double their sales force from 400 to 800 reps. The 800 rep sales force will expand their target list from 50K providers to 75k providers. In addition, the company will use their healthy cash position to launch their direct-to-consumer promotion and double their inventory purchases to ~$250M. Amarin believes these efforts will lead to a 2020 total net revenue of $650M-$700M, while limiting OpEx growth to ~$200M-$250M over 2019. Altogether, these numbers point to a possible return to a positive EPS at some point in 2020 or 2021. 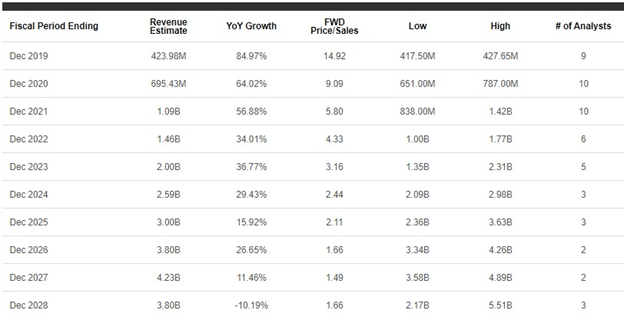 Looking at figure 2, we can see the Street expects Amarin to come pretty close to hitting $1B in revenue in 2021 and will continue to record year-over-year growth until 2028.

Will The Company Get There?

Moreover, the company has been working with their suppliers who are continuing to increase their capacity to support more than $5B in potential Vascepa revenues.

Furthermore, it looks like one of Amarin’s potential competitors, Acasti Pharma (NASDAQ:ACST) flunked its recent Phase III trial for their omega-3 product candidate. Until Acasti figures out what happened with their trial, I don’t see any serious competitors stepping up anytime in the near future.

What’s My Point? I don’t see any major roadblocks that are stopping Amarin and Vascepa from hitting $1B in sales. The company’s commercial structure, Vascepa’s label, the market, the demand, and lack of direct competition, all suggest Amarin has a huge opportunity sitting in front of them. Considering the company’s performance thus far, I don’t doubt they will seize the opportunity.

Amarin and Vascepa are not done yet…the company expects their Canadian partner, HLS Therapeutics (OTCPK:HLTRF), to launch in Vascepa in the near future. In addition, Amarin expects to have approval in Europe by the end of 2020. Amarin CEO John Thero indicated that they have been approached by “a number of companies who are interested in European rights for the product” but they are not going to make any commitments until they are further along in the regulatory process in Europe. In Asia, the company is working with Edding Pharma in China and is assessing prospects in other territories of the world.

Although these catalysts won’t have the same impact as an FDA approval, they do add value to AMRN and could deliver a strong shot of momentum to the share price.

I have been looking for a good opportunity to start reloading my AMRN position, but the charts are showing the ticker has been stuck in a strong downtrend since approval. When looking at the daily chart (Figure 3), we can see the share price has been rejected several times off a clear downtrend line. 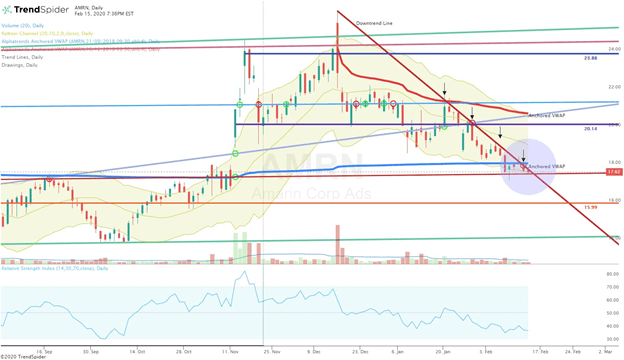 If the share price continues to be rejected by the downtrend line, I will wait to see if it holds above $16.00 per share and will consider adding more downside protection with put options. I may be bullish, but I have to recognize when the charts are showing weakness.

Overall, I am looking to hold AMRN for at least five years in anticipation of a potential acquisition or a large return on my investment.

Disclosure: I am/we are long AMRN. I wrote this article myself, and it expresses my own opinions. I am not receiving compensation for it (other than from Seeking Alpha). I have no business relationship with any company whose stock is mentioned in this article.